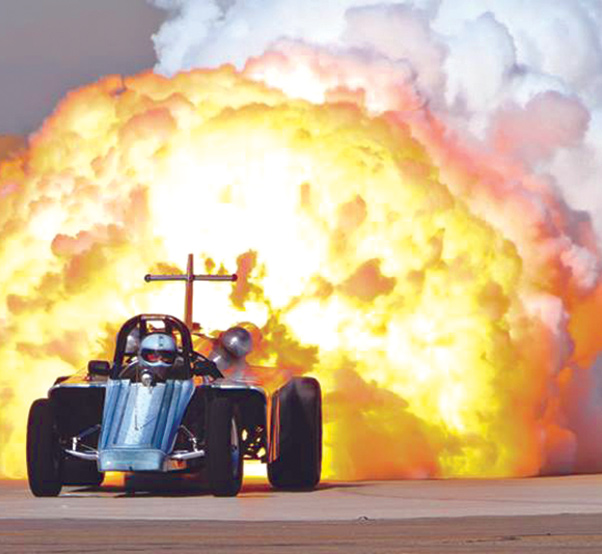 Out on the taxiway you can hear the deafening roar of an engine and see billowing clouds of smoke.

You can feel the reverberations of mini sonic booms. You look up and realize it’s not an aircraft. In front of you is the Smoke-n-Thunder Jet Car preparing to accelerate.

At the end of the runway, the jet car comes to a standstill. An airplane above has challenged Braack to a race. Jaws drop as the aircraft approaches.

Crew member “Scuba” Steve Uhrich signals the driver that the aircraft is directly overhead. He kicks in the afterburner and accelerates the jet car—he’s races at speed approaching 400 mph and overtakes the plane in seconds. Braack is pulling 4.5 Gs, and as he deploys the parachute to bring the car to a stop, he experiences 11 Gs of negative force. Eyes blinking, the crowd is astonished at what it just witnessed.

The Jetcar boasts a Westinghouse J34-48 engine. Originally used in the North American Buckeye T-2A aircraft, the engine provides 10,000hp of power, and 6,000 pounds with the afterburner.