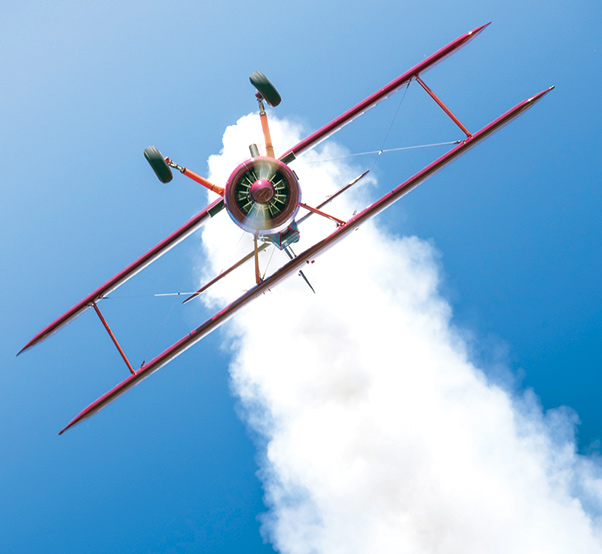 Vicky Benzing’s beautiful Stearman was manufactured in 1940 by the Boeing Aircraft Company for use as a military trainer in World War II.

In February 1946, after the war ended this airplane was sold from the War Assets Administration for $770.

The aircraft’s new owner fitted it with a 450hp Pratt & Whitney R985 engine and converted it to a crop duster where it was used for spraying operations in California’s Sacramento Valley until 1973 when it was disassembled and stored.

In 1990, the aircraft was taken out of storage and restored by Stadel Aircraft in Yuba City, California. The aircraft was converted back form a restricted category crop duster to a standard acrobatic category aircraft.

Benzing bought the aircraft in 1998 and she bases it at the Pine Mountain Lake Airport, near Yosemite, California.

She flies the aircraft at air shows up and down the West Coast, demonstrating the grace and beauty of flight in this early trainer.

Except for the engine and smoke system, the Benzing’s Stearman remains as originally built more than 75 years ago – two ailerons instead of four as most air show aircraft have, no inverted fuel or oil (which is why it takes two hands on the stick to roll and keep positive Gs on the aircraft or the engine will shut off).

Benzing considers herself but a steward of this timeless piece of aviation history.

Born and raised in California, Benzing is an accomplished pilot, skydiver, aerobatic performer and air racer. With more than 7,500 hours of flight time and more than 1,200 parachute jumps, Benzing has a passion for everything airborne.

Her flying career has spanned more than 30 years and she currently holds an airline transport pilot rating as well as a commercial rating in helicopters, seaplanes and gliders.