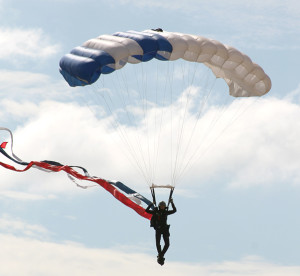 The Wings of Blue have a long standing commitment to personal and organizational excellence as well as a storied history of success. While the airspace that the Wings of Blue operates in is one of the busiest in the world, their drop zone is one of the safest. The primary mission of the Wings of Blue is to run the Air Force’s Basic Freefall Parachuting course, known as Airmanship 490 (AM-490). Members of the team serve primarily as jumpmasters and instructors for this course, devoting most of their time to teaching students about parachuting and training them to make unassisted freefall skydives. AM-490 is the only certified first-jump program in the world where students can make their first freefall jump without assistance. Each year, more than 700 cadets are given the opportunity to take AM-490 and earn their jump wings.

The Wings of Blue has both a demonstration team and a competition team. The demonstration team travels across the country to airshows, sporting events, and other venues to represent the Air Force in precision parachuting. Similarly, the competition team represents the Air Force by competing with teams from around the country in six-way speed formations, four-way relative work, two-way free fly, and sport accuracy.

It all began 54 years ago at the U.S. Air Force Academy when, in the spring of 1962, a band of bootleg jumpers made their first parachute jumps as cadets. Using condemned SERE rigs and local aviation pilots, these cadets made several jumps in the Colorado area.

During that spring, a few cadets by the names of Aronoff, Davis, Kelley, McCurdy and Sijan — at their own risk and expense — made a number of demonstration and competition jumps to include our first collegiate-national appearance in Wisconsin winning a gold medal.

They had no sanctioning from the Academy; truthfully, the Academy had no idea.

When words of their jumping escapades got back to the superintendent, the Academy leadership was facing a dilemma — punish these outlaws or reward these collegiate competitors — needless to say, there were some rocky times those first two years, but after receiving a challenge from the Commandant of West Point to compete in a para meet, club status resulted in May 1964. Under the careful guidance and nurturing of Cadet Pete Johnston, the club grew with great renown not only in the cadet wing, but the skydiving community as well. His efforts along with those of the graciously volunteering officer and enlisted core such as Capt. Craig Elliot, Capt. John Garrity, Staff Sgt. Mort Freedman and Master Sgt. James Howell helped set the foundation for the now internationally known United States Air Force Academy Parachute Team Wings of Blue.

Highlights
• In September 1964, the fledgling parachute club made its first jumps on Academy property.
• In July 1966, the academy’s parachute club became “THE Air Force Academy parachute team”.
• In the spring of 1967, the signature instructional course, Airmanship 490 basic free fall was started (still called AM-490 today).
• Also in spring of 1967, Cadet Steve Elm created the patch for the team—nearly unchanged today.
• In spring of 1970 — permission to award the “basic parachutist” badge to AM-490 grads was granted (and still done today).
• Spring of 1976 — the need for a flashier name changed USAFA Parachute Team to Parachute Team Wings of Blue, the birth of the term PTWOB — the name we still use today.
• In September 1977, two brand new UV-18B Twin Otters arrived; those two aircraft are still used today.
• In 1978 the team transitioned from the use of round canopies to the sportier square design. The Wings of Blue were among the first group of people to jump the revolutionary design. Lacking the facilities to conduct our own operations, the squadron’s first enlisted force, several combat controllers, would allow cadets to train with them.
• It wasn’t until 1994 that the 98th flying training squadron stood up as the official home for the Wings of Blue. 490-round parachute canopies changed to square canopies and we added a third UV-18B Twin Otter to the inventory.
• In 2008, the 98th flying training squadron received the official moniker as THE Air Force parachute team. Additionally that year, the team made the first official Air Force wing suit jumps.
• In 2009, the team accomplished the first ever live video feed on the Jumbotron into many of our venues across the nation.

Continuing to dominate competitions at the collegiate level and expanding their renown both nationally and internationally through venues such as the BCS championship game and Air Shows the Wings of Blue has developed from the small unsanctioned team. The Wings of Blue has been an aspiring venue through which many great leaders and officers have grown from. It is hard to say that without such rich history, such heights would never have been possible.