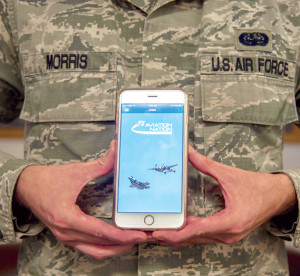 Staff Sgt. Michael Morris, 99th Communications Squadron base content manager, displays the application that he designed for the Aviation Nation air show at Nellis Air Force Base, Nev., Nov. 9, 2016. This will be the first year Nellis AFB will have an app available for download specifically for the air show.

Attendees experienced exciting aerial acts, an array of static displays from both past and present, and had the chance to interact with the Airmen who carry out the Nellis, Creech and Nevada Test and Training Range mission.

Those who attended the air show were able to download the Aviation Nation app on their smart phone or tablet to enhance their experience while enjoying the show.

“It is an electronic brochure that put all the Aviation Nation details right in your pocket, and then some,” said Staff Sgt. Michael Morris, 99th Communications Squadron base content manager and app developer. “From show times to vendors and exhibits, the app had everything you need for air show information dominance.”

This was the first year Nellis AFB had an app available for download specifically for the air show.

“While it’s not the first time an app has been created for any air show, the Aviation Nation app is certainly the most sophisticated,” said Morris. “It has a play-by-play layout of all the show center stage performances. It has information on all participating aircraft, including where to find each one. It also has a method for purchasing premium seating tickets.”

Additionally, the app has several other features and provided up to date information encompassing what was going on during the air show with the ease of it being on a smart phone or tablet.

“It allowed our guests to keep up with the latest information, changes in schedule and alerts to important events that will impact them (i.e. any real time emergency or up to date traffic information),” said Bob Jones, air show director. “They were able to find what aircraft were going to be at the air show and learn about them even before coming.”

The app was a useful source of information prior to attending Aviation Nation and served as a valuable tool to navigate the air show.

“There are several menu options for guest to find out what there was to eat and at what price, locate the various attractions,” said Jones. “One feature included the use of Bluetooth beacons that when you approached say for example an aircraft it “pinged you” and told you everything about the aircraft’s capabilities, mission and offered a video with the aircraft in action.

“All in all, the phone app helped our guests have a better experience, learn more about their community and their Air Force,” said Jones.

Although the air show is over, the app is a useful resource for people who may want to view the performers and static displays from Aviation Nation.

The app is available for download for patrons in app stores.