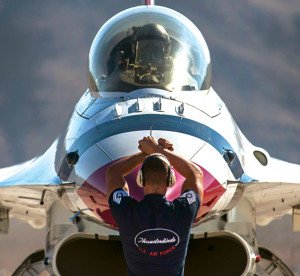 NELLIS AIR FORCE BASE, Nev. — Aviation Nation, the Nellis Air Force Base’s air show and open house, took place Nov. 12 and 13, showing off numerous acts from past and present while giving the community the chance to interact with Airmen.

“Nellis, Creech and the Nevada Test and Training Range have enjoyed decades of support from the communities across Southern Nevada,” said Col. Paul Murray, 99th Air Base Wing commander. “The open house and air show is just one way to give back and show our gratitude for all the support the community provides to our Airmen.”

The air show offered members from the community and those who travelled from abroad for a chance to view multiple acts and experience the unique aspects of what occurs at Nellis AFB.

“Ranging from Vicky Benzing’s 1940 World War II Stearman, to present day 5th Generation fighters like the F-22 and F-35, variety and heritage are showcased this year,” said Murray. “With more than 100 static displays bringing in everything from a DC 10 water drop, to a smoke and thunder jet car, and of course our Nellis capabilities featuring air-to-air and air-to-ground demos.

Through these acts and air shows static displays, the Air Force strengthens its bonds with the surrounding community.

“There are many aerial acts and static aircraft during the Nellis Air Show which are snapshots of aviation history,” said Murray. “The air show gives Nellis AFB an opportunity to demonstrate the Air Force’s mission and military capabilities, as well as the skill and professionalism of the Airmen assigned here.”

To strengthen this relationship, the 2016 Aviation Nation Air Show played host to a record number of attendees from all around the globe, and also featured the final performance of the year for the United States Air Force Thunderbirds.

“This event also marks the end of the air show season for the U.S. Air Force Air Demonstration Squadron ‘Thunderbirds’ who will thrill their hometown crowd with precision and professionalism,” said Murray.

This year the public was also able to download the Aviation Nation app to make the Nellis Air Show experience truly one of a kind.

“The app allowed our guests to keep up with the latest information; changes in schedule, alerts to important events that will impact them, they were be able to find aircraft and learn about them even before coming to the Air Show,” said Bob Jones, air show director.

According to Jones, Aviation Nation played host to more than 300,000 spectators from the community, including media.