Pilots, sensor operators, maintenance and intelligence Airmen answered questions about the aircraft and their jobs as part of a static display. The display helped guests attending the air show better understand the MQ-1 and MQ-9 capabilities and mission.

“We brought out more than 30 Airmen from Creech to connect with the people,” said Capt. Michael, 432nd Wing MQ-1 Predator pilot. “We had two maintenance teams, one to assemble the aircraft, and one to brief the technical aspects of the aircraft and operations representatives to brief the mission and flying aspects.”

Although the open house was host to fighter, bomber and many other demonstrations during the celebration of “75 Years of Airpower” the MQ-1 and MQ-9 drew crowds.

The air show hosted more than 300,000 people on the Nellis AFB flightline, giving plenty of opportunities to learn for people of all ages who were curious about the aircraft and mission.

For some spectators, this was the first time encountering an MQ-1 or MQ-9 up-close “I didn’t know what to expect,” said Barbara, a Las Vegas resident. “It was surprising how it all works. These aircraft are unbelievably amazing.”

Luis Carrillo, a Las Vegas resident, explained he was impressed by all the technology equipped on the aircraft while his daughter Alliah, seven, said these aircraft are important because if someone is in trouble we can find and help them.

“It’s important to bridge the gaps between common misconceptions and what we really do for the American people,” Michael said. 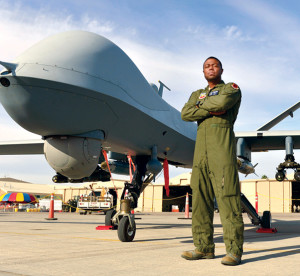 Staff Sgt. Kenneth, 432nd Wing MQ-9 sensor operator, stands in front of an MQ-9 Reaper during Aviation Nation Nov. 11 at Nellis Air Force Base, Nev. Kenneth, along with many other maintenance, intelligence and aircrew members of Creech AFB, Nev, briefed spectators about the capabilities and basic functions of the MQ-9 Reaper and MQ-1 Predator.

The Predator and Reaper are both medium-altitude long-endurance aircraft, capable of persistent attack and reconnaissance capabilities in the support of global contingency operations.

“Overall the response we had was positive,” Michael said. “We definitely clarified and demonstrated both well-known and lesser-known aspects of the mission and instilled pride in the RPA community.”