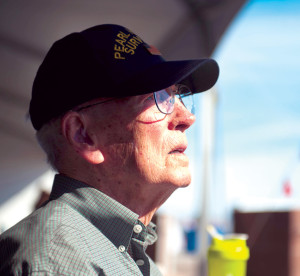 Leonard Nielson, watches as an aircraft passes by during the Aviation Nation air show at Nellis Air Force Base, Nev., Nov. 12. Nielson is a 94-year-old Pearl Harbor survivor. He was a Navy Lt. Junior Grade ship vetter. He was a part of a group of people trained in firefighting, damage control to the ship and making all the repairs possible to keep the ship afloat if it was damaged.

NELLIS AIR FORCE BASE, Nev. — “Most of us knew or felt something. It was in the winds, something was happening … I was transferred to the USS Solace …”

“That’s where I became a survivor of Pearl Harbor.”

Leonard O. Nielsen joined the U.S. Navy at 18 years old. He was a Navy Lt. Junior Grade ship vetter. He was a part of a group of people trained in firefighting, damage control to the ship and making all the repairs possible to keep the ship afloat if it was damaged.

On December 8, President Franklin Delano Roosevelt asked Congress for and received a declaration of war against Japan. On December 11, Germany and Italy, allied with Japan, declared war on the U.S. The United States had entered World War II.

“During Pearl Harbor, I was aboard the Solace for an appendectomy.” said Nielson. “I was recovering and out on deck when the attack started and I watched all of it.”

The Solace was a 409 foot hospital ship which had a primary function as a floating medical treatment facility.

Nielson spent his recovery time on the Solace rescuing men who had become badly burned from oil in the water.

[We tried] to assist those from the ships that were so badly damaged and burning. People were in the oil covered water and it was on fire. I must take my hat off to anyone else who was involved because two of us made many trips taking those who were badly injured and burned to the hospital ship Solace.

“To see the unison of how people worked together; the nurses aboard that hospital ship are so often overlooked or forgotten how they work with all the men so badly damaged, hurt and burned one must remember that it was the team work and training we had had that enabled us to do what we did.

Team work
“Other than going through the horrors and turmoil’s of the attack [I can share this] to be a survivor of the attack on Pearl Harbor makes you appreciate what everyone else does, if they are sincere about it.” said Nielson.

After recounting some events of his time aboard the Solace, Nielson went on to express the reason he came to Nellis Air Force Base. He came and visited the Aviation Nation air show to pay homage to the newer generation of military.

This year, Aviation Nation celebrated “75 Years of Airpower” through the Air Force’s accomplishments in air, space and cyberspace. During the two-day event, there were more than 50 aircraft on display along with an array of vendors and aerial demontrations for viewers. 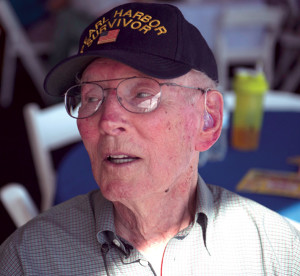 Leonard Nielson, sits and watches the Aviation Nation air show held at Nellis Air Force Base, Nev., Nov. 12. Nielson is one of the few Pearl Harbor suvivors still around in Nevada. During Pearl Harbor he was aboard the USS Solace and helped assist those who were injured.

“[I came] because of my intense interest in the air plane history.” said Nielson. “My first ride in an airplane was when I was about 10 years old. My brother and I cleared fences and so on for a barnstormer who was selling rides. We got a free ride by taking down barbed wire fences and filling in ditches. The pilot’s name was Bill Pawns and that was about the year 1931.

“I am intrigued with all the changes in the aviation industry and the planes. There isn’t a day that goes by that I don’t watch for them taking off and/or landing. I have a great admiration for the training of the people who operate these aircraft, both on the ground and in the air.”

Before bidding Nellis AFB farewell, Nielson left a few words of wisdom from his past experiences.

“To this day, I don’t worry about problems. Maybe I can do something about them. Maybe I can’t. But I can do my best. That’s what we’re trained to do…

“We need to look very deep at past history and occurrences to apply many of the principles to our future. Perhaps it will heal part of the country’s failings.”