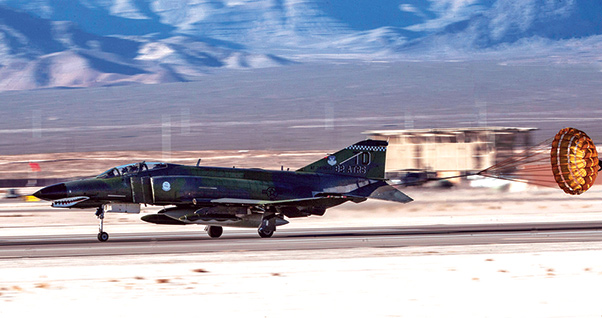 NELLIS AIR FORCE BASE, Nev. — After more than 60 years of service, the QF-4 Aerial Target, modified from the F-4 Phantom II, will officially retire from service.

The aircraft was highlighted during Nellis Air Force Base’s Aviation Nation air show Nov. 12 and 13, allowing more than 300,000 spectators from around the world, the opportunity to witness one of its final performances.

“[The QF-4 retiring] is bittersweet,” said King, 82nd Aerial Target Squadron Detachment 1 commander. “It’s been a phenomenal workhorse for our country for years. When the military revitalized the aircraft after retiring them in 1997, it gave them a second lease on life.”

The QF-4 is a remotely controlled target, which simulates enemy aircraft maneuvers. QF-4s are basic F-4s reconfigured for unmanned flight and are used in full-scale aerial target missions, providing targets for all DOD weapon systems.

“Originally, this was the first multi-roll, mass-produced international fighter aircraft,” said Harkins. “At the time it was the Vietnam ‘hero.’”
The history of the aircraft is unprecedented throughout its lifecycle.

“Just as service members come and go in their military careers, unfortunately so do aircraft,” said Harkins. “It’s getting harder and harder to do the job that it’s supposed to do [based on new technology].

“It’s too old to go as high and as fast or as many [gravitational forces] as the customers need it to so they can [properly] test equipment,” he added.

The QF-4 has brought together many different stories and generations. 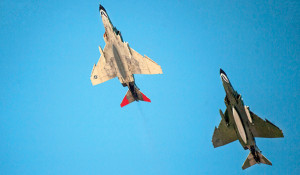 Lt. Col. Ron “Elvis” King and Jim Harkins, pilots from Holloman AFB, N.M., perform aerial acts in QF-4 Aerial Targets during the Aviation Nation air show on Nellis Air Force Base, Nev. Nov. 11. The event brought more than 300,000 spectators to view one of their final
performances before retiring the aircraft.

“My favorite memories are probably from this past six months,” said Harkins. “I have flown to more places now than I have in the past 10 years and it’s been [amazing].”

King chimed in. “I don’t have a specific favorite moment, but being able to take it on the road and talk to so many families of people who had flown it or worked on it and especially the people who were saved on the ground in Vietnam,” said King. “Those are the things I’ll remember best.

“I’ll be sad when they go, but I’m also excited for the next chapter when we bring in the QF-16 and the capabilities that it brings as well,” said King.

In May 2015, all remaining QF-4s were transferred to Holloman AFB for final operations. The last unmanned mission in a threat representative configuration was flown Aug. 17, 2016, and unmanned operations ended in September.

The last manned QF-4 flight is planned for Dec. 21.