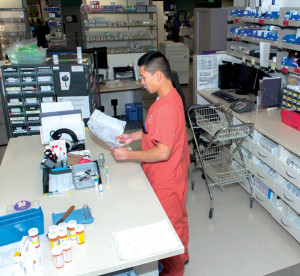 “We load the machine with the most commonly used medications, and when there is a need, ordered by a physician, we use the software in the pharmacy to interphase with the machine,” said Carmel Fauni, 99th MDSS pharmacy technician. “Then the nurses are allowed to access the precise location within the PYXIS and remove the correct medication.”

The new PYXIS machine has streamlined the process in which the pharmacy provides inpatient medications throughout the MOFMC.

“The main challenge with PYXIS is when a technician receives the machine report for replenishment,” said Maj. Tak Li, 99th MDSS Chief of Pharmacy Operations. “Technicians will pull medications from our stock here at the inpatient pharmacy, our pharmacist will verify and then a technician will take them to the floor to place them into the machine. There are a lot of human pieces in the process that contain inherent risk.”

In order to mitigate that risk and provide the safest care to patients, the pharmacy has taken steps to make the process more seamless and error-free. 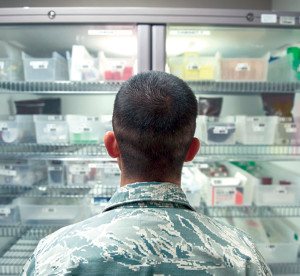 Staff Sgt. Victor Rodriguez, 99th Medical Support Squadron pharmacy technician, refills the PYXIS machine in the intensive care unit of the Mike O’Callaghan Federal Medical Center on Nellis Air Force Base, Nev., Nov. 22. With the machine being utilized, the pharmacy has seen its inaccuracy rates go down from five in a month to three over the course of eight months.

“What we have done is rejuvenated our barcode system for medications,” said Li. “Each drug has a unique code that basically tells, one system from another, what that medication is. So if the unique drug code is correctly recorded in the barcode scanning system, which Ms. Fauni has done a wonderful job auditing, correcting, and adding more than 400 inpatient medications, now in front of the PYXIS, a technician only need to get the medication, scan the barcode and the correct drawer will open, eliminating the human error. In the past, we would have to, instead, manually tell the PYXIS how many of what medication is being put in and then have to place the medication in the right location. Not only was it cumbersome, but also with significant risk. The new technology and process are much simpler and safer.”

With the PYXIS machine being utilized, the pharmacy has seen its inaccuracy rates fall over the months that it has been active.

“Even before this implementation, our focus has always been on our patients, and with this new system the risk to our patients exponentially reduces,” said Li. “That’s what the Medical Group and Air Force Medical Service strive toward — becoming a high reliability organization with the goal of zero harm to patients.”