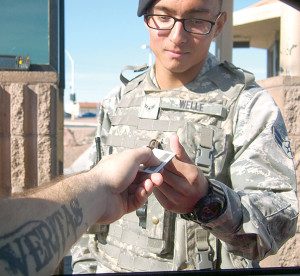 Airman 1st Class Logan Welle, 99th Security Forces Squadron entry controller, accepts an identification card for access to Nellis Air Force Base, Nev., Nov. 23. For the Pass and ID office, some customers were unable to receive an access badge for the base following approval notification. Since then, the office went through a six month continuous process improvement to where customers can now show up at the front gate to request an access badge.

CPI is an ongoing effort to improve quality, products, services or processes and solve problems on and around the base.

“We realized we had a problem with allowing the contractors on base,” said Tech Sgt. Christopher Spicher, 99th Security Forces Squadron, NCO in-charge, “We run background checks in the Pass and ID office so there was a lot of duplication as we were using a paper based product. We were behind.

“Mr. McCully came in and began improving our process to 99 percent (for receiving base access),” he continued. “This equates to 106,000 man hours that were saved and about six million dollars.”

The problems were identified prior to the airshow coordination in 2014. Vendors were unable to access the installation after they had already been vetted and approved.

“We used the Air Force eight-step practical problem solving model where we gathered the data over a 30-day period to determine the magnitude of the problem,” said Sean McCully, Installation CPI manager. “We then determined the potential root causes of the problem and then developed solutions based on the findings. All the subject matter experts and some of the customers mapped the current process and we found inefficiencies and non-value added processes that created confusion in the Pass and ID office.”

Several solutions were implemented. The Pass and ID office reduced duplicate paperwork processing and created a spreadsheet for all processed badge requests instead of multiple. They also established a work standard and ensured all personnel were trained to it.

Now, when customers show up to the front gate to request an access badge, the customer will be provided one immediately and will not be turned away as had happened prior to problem resolution.

“Hopefully units understand that problems exist within their organizations and there is a methodology to solve them,” said McCully. “It’s better to expose the problem and work to solve it rather than have people spending time with what we call, ‘non-value added work’, working in a broken process that provides no value to their customers.”