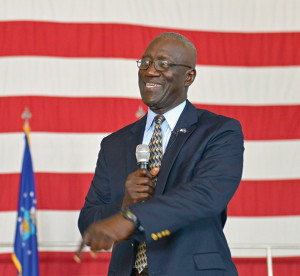 Turner served from 1976 to 2011, deploying in support of missions such as Operations Iraqi Freedom and Enduring Freedom, and earning awards such as the Legion of Merit with two oak leaf clusters and the Bronze Star Medal with one oak leaf cluster.

Turner spoke about the Air Force providing support for the other branches and addressed millennials in the audience, pointing out millennials as the most diverse generation and noting that technology is second nature to them.

“Millennials are going to change the way we live,” said Turner. “A millennial will put someone on Mars. A millennial will find a cure for cancer and Ebola. But the thing that excites me most about millennials is this: because of their international connectivity every day, the millennials will bring us to a state of world peace like we’ve never known before.”

For those wondering if the millennials will continue to fight for the nation, take a look around; there is no draft to bring them into the service, all of the millennials volunteered, said Turner.

“A lot of times when you first get in (the service) it’s hard for you to understand the importance of what you’re doing,” said Tech. Sgt. Patrick Bentley, 20th Civil Engineer Squadron fire emergency services flight training NCO in charge. “The guest speaker let them know how important the millennials are to us and to the mission being successful.”

The combat challenge and guest speaker events gave Airmen and Soldiers an opportunity to increase their resiliency and warrior mindset after the operational readiness exercise, Weasel Victory 17-03.