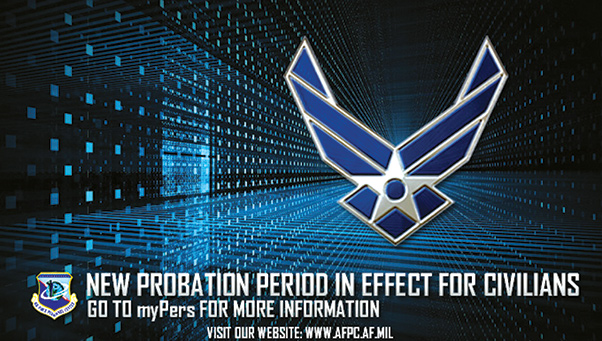 All new Department of Defense civilians appointed to permanent positions in the competitive service are now required to serve a two-year probationary period.

JOINT BASE SAN ANTONIO-RANDOLPH, Texas — All new federal employees appointed within the Department of Defense to permanent positions in the competitive service are now required to serve a two-year probationary period.

The new requirement took effect Nov. 26, 2015, as part of the fiscal year 2016 National Defense Authorization Act.  The change does not apply to employees appointed prior to that date or to those appointed in excepted service.  The Office of the Secretary of Defense issued a policy memorandum Sept. 27, 2016, highlighting the change.

The probationary period is used to determine an employee’s competence for continued employment in the federal government.  During that time, supervisors monitor their work and track their overall job performance.

To ensure all Air Force civilian employees are aware of the change, the Air Force Personnel Center recently sent out more than 8,000 automated emails to Air Force employees who may be affected.

“We want to be proactive in getting the word out to our Air Force employees,” said Robbie Brown, civilian force management branch chief. “Our goal is to ensure our civilians have the right information at the right time so they can manage their careers more effectively.”

As stated in the OASD policy memorandum, the longer probation period is needed because much of an employee’s first year is spent in training, various office rotations and in other project-specific tasks.

The new requirement also applies to those newly appointed to career senior executive service positions.  Probationary periods can also vary when an employee is appointed to a new position outside his or her agency.

For more information about the new two-year probationary period and Air Force personnel programs, go to the myPers website at https://mypers.af.mil/.