The GNAT 750 was the first long-endurance remotely piloted aircraft. After it was purchased by the United States Air Force, it would evolve into the RQ-1 Predator during the 1990s to fly its first missions over the Balkans during the Kosovo conflict.

In the 1980s, the Defense Advanced Research Projects Agency added modern day technology to the decades old idea of using remotely piloted aircraft for reconnaissance purposes. Little did DARPA or the Air Force know how impactful this development would be.

As a result the Air Force immediately purchased a long-endurance remotely piloted aircraft called the GNAT 750, resulting in the creation, production and development of the RQ-1 Predator of the early 1990s. By 1996, operators were flying intelligence, surveillance and reconnaissance missions over the Balkans, providing an eye in the sky during a period of unrest.

The early years
The RQ-1 evolved into the lethal and precise MQ-1 Predator, which provides persistent attack and reconnaissance capabilities to combatant commanders around the world. But the RQ-1, as a first iteration of a modern RPA, needed changes.

“In the RQ-1 we didn’t even have a turbo engine; it was a [naturally aspirated] Rotax 912,” said Chief Master Sgt. Christopher, 726th Operations Group chief enlisted manager. “So, the first advancement was really with the Rotax 914 turbocharged engine.”

The new and current Rotax 914 engine continues to allow the aircraft to fly at a higher altitude more reliably.

The chief went on to say when he started flying, the community deployed with the full squadron and flew by line of sight, and eventually received a laser-enabled Multi-Spectral Targeting system. The MTS allows Predator operators to integrate with other aircraft to laser designate targets and directly assist troops on the ground.

The most effective addition was a weapons capability that was implemented in the early 2000s. The Air Force retrofitted the platform with weapons pylons and modified the AGM-114 Hellfire anti-tank missiles to accommodate the newly modified aircraft and thus, the MQ-1 Predator was created.

“Initially, from an operations perspective, not a whole lot changed,” Christopher said. “It was a slow progression to be accepted as a combat platform.”

During this time Creech Air Force Base was known as Indian Springs Auxiliary Airfield, with only three squadrons supporting Operation Enduring Freedom and Operation Iraqi Freedom. They provided ISR capabilities while educating the Army on its own capabilities. 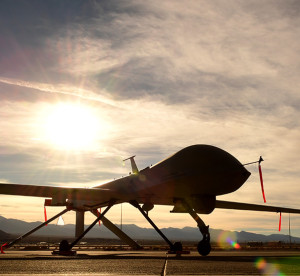 An MQ-1 Predator sits on the flight line Dec. 8, 2016, at Creech Air Force Base, Nev. The predator started as an RQ-1 in the late 1990s providing reconnaissance capabilities only until the early 2000s when it was equipped with two AGM-114 Hellfire missiles.

“Once MQ-1 operators were called on for weapons strikes and proved their accuracy, they were demanded highly, not just for ISR but also for close air support,” said Lt. Col. Jesse, 91st Attack Squadron director of operations.

As the ground forces became more familiar with having an MQ-1 overhead, the airframe became sought out for its existing capabilities such as raid overwatch, strikes, combat search and rescue and Remote Operations Vehicle Enhanced Receiver, which is the ability to send an MQ-1’s video feed to a tablet used by ground forces.

The MQ-1 Predator was also equipped to perform remote split operations, which allows the aircraft to fly overseas from stateside locations.

“RSO changed everything,” Christopher said. “Now it didn’t matter where we were in the world or where we had to go, we had the flexibility to accomplish the mission. Flexibility is the key to airpower.”

Even with these capabilities, the ever-evolving battlespace environment determined that a more advanced remotely piloted aircraft was needed. Thus, the MQ-9 Reaper was introduced in 2007 with the standup of the 432nd Wing. The MQ-9 is bigger, has more power and carries more munitions than an MQ-1, making it a true attack platform.

“Bringing on anything new is exciting but the capabilities that the MQ-9 brought were phenomenal,” Christopher said. “Going from the speed of an MQ-1 to the MQ-9, bringing in larger targeting pods so now we can see at a higher fidelity from a longer distance and higher altitude, and increasing payload capacity from two Hellfires to four and the option to carry two 500-pound bombs is pretty [amazing].”

The addition of the MQ-9 increased the demand for more missions, which required more personnel and squadrons, resulting in the wing’s continual growth. The growth was so exponential, the MQ-1 and MQ-9 flew a combined 1 million flight hours by 2011, then 2 million hours two short years later in 2013.

“We had no idea at the time that RPAs would grow into what they are now; with the aircraft flying the most hours across the force, the most requested asset out there, and versatile set of missions we can accomplish,” Christopher said. “It’s mind-blowing in 20 years we’ve gone from forward deploying downrange as an ISR asset flying line of sight link, to flying 60 plus combat lines around the world.” 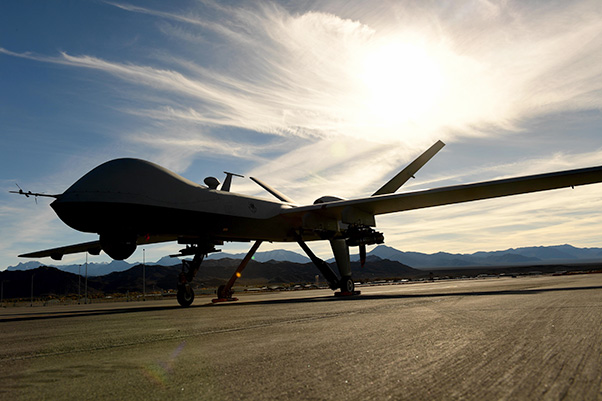 An MQ-9 Reaper sits on the flight line Nov. 22, 2016, at Creech Air Force Base, Nev. The Reaper is an evolution of the MQ-1 Predator and can carry four AGM-114 Hellfire missiles and two 500 pound bombs while being able to fly for 18-24 hour missions.

The mission continues to evolve as the Air Force has begun the transition to an all MQ-9 force.

“It’ll be a good thing overall and there’s very little we’re losing when switching to [an] all MQ-9 force; but we will be gaining things logistically by having a single supply line,” Jesse said. “The benefits of going to a single force outweigh MQ-1 advantages.”

A single supply line will mitigate equipment for two different aircraft and streamline training for maintainers, pilots and sensor operators to a single airframe.

Training personnel, collecting information and neutralizing enemies are important tasks. However to some, the most rewarding task is keeping the troops on the ground safe.

“I know for a fact the RPA being overhead is very good for ground troops,” Jesse said. “They love having us look over them and there were times where we were the sentry for a platoon of Army guys so they could sleep soundly because we could make sure they were safe.”

He went on to say remotely piloted aircraft have had a significant impact and will continue to do so from the tactical to the strategic levels.

“We have enabled persistent attack and reconnaissance from the ground floor by being able to provide a safe environment for not only the guys on the ground downrange but Airmen deployed in garrison,” Christopher said. “Then the persistence we provide for the combatant commanders and ground forces commander is constant. We can employ weapons or guide weapons on other aircraft and keep our guys safe and bring them home. We have enabled the saving of more American and coalition lives than ever before.”

The MQ-1, MQ-9 enterprise has seen great success in a relatively short amount of time. According to Chief Master Sgt. Christopher, it has just scratched the surface of remotely piloted capabilities.

“I think we as a community, was and still are, on the ground level on what the potential is of RPAs,” Christopher said. “There’s a chance we might see some other unmanned aircraft like cargo or air refueling. I think the potential is limitless.”

While the future is yet to come, there is no doubt the MQ-1 and MQ-9 force has changed the game in terms of warfighting. The tenacious attack and reconnaissance capabilities continue to dominate close air support, battlespace awareness and other mission sets requiring the unique abilities of the combat RPA and its operators.