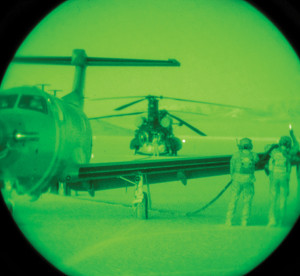 The Weapons School trains expert instructors and leaders skilled in integrated battlespace dominance. The WSINT occurred at Nellis Air Force Base and on the NTTR from Nov. 28 to Dec. 14. The exercise included 34 integrated full-mission profiles, including units from around the Air Force and joint community.

This exercise is the culmination of five-and-a-half months of training and is the capstone event for the Air Force’s newest weapons officers.

USSOCOM executes and trains within the guidelines of the five Special Operation Forces Truths. WSINT provided an unparalleled opportunity to train to the fifth SOF Truth, “Most Special Operations require non-SOF support.”

“This is not just a SOCOM mission set. This is a national mission set; it is what sets us apart from the rest of the world. All of our citizens know that we will come get them, any place, anytime, anywhere,” said Lt. Col. Meghan Ripple, 14th WPS commander.

In total, the iteration launched 17 aircraft and more than 200 personnel supporting the rescue of two hostages, including a 50-man assault force as well as five space, cyber and intelligence operators. Without this integrated force packaging, the mission would not succeed in the operational environment or on the NTTR.

“When our people have been taken hostage, there shouldn’t be any doubt to the extent at which we [U.S. Forces] will integrate to effectively and decisively recover our own,” said Maj. Brough McDonald, 34th WPS lead instructor.

The mission was also a night of firsts. The USAFWS and WSINT enhanced operational relevance through greater integration of assets required for this mission set; a 160th SOAR MH-47 and 14th WPS U-28 accomplished a first of its kind rotary-wing to fixed-wing forward area refueling point operation at the Delmar Lake desert landing zone. The fuel extended the mission duration of critical intelligence surveillance and reconnaissance.

The forward area refueling site was enabled by special tactics Airmen providing security at the landing zone and was conducted within a highly contested environment with an AC-130U providing close air support.

In addition to the refueling operation, the mission was also the first non-deployed U-28 semi-prepared landing and the first use of the newly acquired AFSOC MC-12W from the Oklahoma Air National Guard in a large-force exercise.

“The coordination required to pull these feats off by the USAFWS team was incredibly rewarding by watching these events unfold from the joint operations center,” said Capt. Tyler Martin, SOF exercise lead planner.

This opportunity for SOF to train with the combat air forces provides lessons learned to improve the chances of success when the nation requires execution of this mission. All graduates of the Weapons School are expected to create and execute integrated plans at the expert level for all USAF mission sets, not simply the career field they originated from.