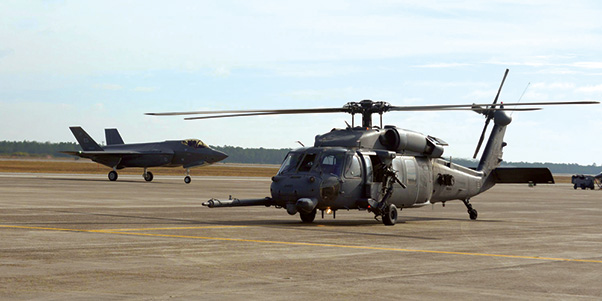 TYNDALL AIR FORCE BASE, Fla. — The 66th Rescue Squadron sent three of its HH-60G Pave Hawks and 59 Airmen to participate in the large scale Checkered Flag 17-1 exercise at Tyndall Air Force Base, Florida.

Checkered Flag 17-1, which runs Dec. 5-16, is an exercise that aims to improve the ability of multiple squadrons from around the country to come together into a large scale total force integration whose collective resources aid in response to unforeseen or unplanned operations.

“We are here to train with the E-3 Sentry and fighters so that we are all better prepared for any future scenarios,” said Capt. Andrew King, 66th Rescue Squadron mission director of operations. “It is not often that we have the opportunity to train with this many different aircraft in this environment.”

The mission of the 66th RQS is to provide rapidly deployable, expeditionary and agile combat search and rescue forces to the battlefield in response to contingency operations worldwide. The unit is a fully operational squadron from Nellis Air Force Base, Nevada, and conducts peacetime search and rescue in support of the National Search and Rescue Plan and the U.S. Air Force Warfare Center.

“During each exercise, the allied forces will experience a downed aircraft,” King said. “We will work with the allied assets overhead to facilitate the recovery of the isolated personnel.”

The Nellis Airmen were part of many different units tasked with demonstrating their ability to rapidly join an integrated combat team and conduct operations on a large scale, said Col. Randall Cason, 44th Fighter Group commander. “Checkered Flag is an outstanding opportunity for combat units to familiarize and synchronize in order to become even more effective in their combat missions.”

HH-60G Pave Hawks have a long history of use in contingencies, starting with Operation Just Cause in 1988. During Operation Desert Storm they provided combat search and rescue coverage for coalition forces in western Iraq, coastal Kuwait, the Persian Gulf and Saudi Arabia. They also provided emergency evacuation coverage for U.S. Navy SEAL teams penetrating the Kuwaiti coast before the invasion. The 66 RQS has met every challenge of its operational tasking in every major contingency.

“We continuously train and challenge our Airman so that when we get the call, we proudly stand behind the rescue motto, ‘These things we do, that others may live,’” said Maj. Annie Driscoll, 66th RQS mission commander.

Participation in exercises like Checkered Flag allow for the pilots and aircrew who operate the HH-60G to maintain the level of readiness required to stay up to speed with such critical missions.