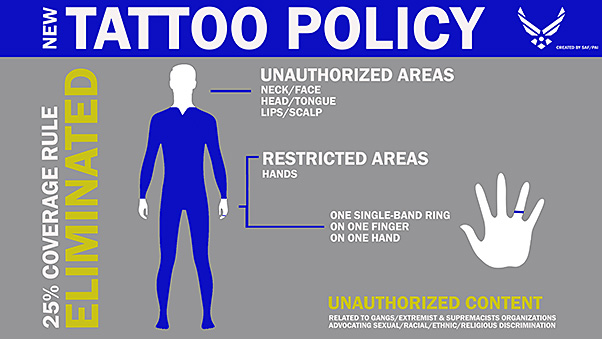 The Air Force announced new policies on dress and appearance with regard to tattoos, as well as changes to service medical accession policy Jan. 9.

These changes result from a review of Air Force accessions policies directed by Air Force Secretary Deborah Lee James in 2016.

“As part of our effort to attract and retain as many qualified Airmen as possible we periodically review our accessions policies,” she said. “In this instance, we identified specific changes we can make to allow more members of our nation to serve without compromising quality. As a next step in this evolution, we are opening the aperture on certain medical accession criteria and tattoos while taking into account our needs for worldwide deployability and our commitment to the profession of arms.”

Authorized tattoos on the chest, back, arms and legs will no longer be restricted by the “25 percent” rule, while tattoos, brands or body markings on the head, neck, face, tongue, lips and/or scalp remain prohibited. Hand tattoos will be limited to one single-band ring tattoo, on one finger, on one hand. The hand tattoo change ensures the ability to present a more formal military image when required at certain events and/or with dress uniforms. Current Airmen with existing hand tattoos that were authorized under the previous policy will be grandfathered in under the old policy standards.

A recent review of Air Force field recruiters revealed almost half of contacts, applicants and recruits had tattoos. Of these, one of every five were found to have tattoos requiring review or that may be considered disqualifying; the top disqualifier was the 25 percent rule on “excessive” tattoos. The new policy lifts the 25 percent restriction on authorized tattoos to the chest, back, arms and legs, opening up this population for recruitment into the Air Force.

Tattoos, brands and body markings anywhere on the body that are obscene, commonly associated with gangs, extremist and/or supremacist organizations, or that advocate sexual, racial, ethnic or religious discrimination remain prohibited in and out of uniform. To maintain uniformity and good order and consistent with Air Force Instruction 36-2903, “Dress and Personal Appearance of Air Force Personnel,” commanders will retain the authority to be more restrictive for tattoos, body ornaments and/or personal grooming based on legal, moral, safety, sanitary, and/or foreign country cultural reasons.

The new tattoo policy is effective Feb. 1, 2017. Further implementation guidance will be released in an addendum to the policy guidance.

The Air Force’s periodic review of medical accession standards and advancement of medical capabilities prompted policy changes with respect to waivers concerning common conditions that have routinely disqualified prospective Airmen from service: eczema, asthma and attention deficit hyperactivity disorder. Waivers for eczema, asthma and ADHD currently constitute the highest volume of requests from Air Force recruiters. Additionally, current Air Force accession policy with respect to pre-service marijuana use is not reflective of the continuing legalization of marijuana in numerous states throughout the nation.

“We are always looking at our policies and, when appropriate, adjusting them to ensure a broad scope of individuals are eligible to serve. These changes allow the Air Force to aggressively recruit talented and capable Americans who until now might not have been able to serve our country in uniform,” said Chief Master Sgt. of the Air Force James A. Cody.

While medical accession standards are standardized across the Services, the Air Force has modified some of its more restrictive service policy, or established specific criteria to streamline and standardize waiver processes to increase the number of qualified candidates entering service. These changes include:
• Eczema: Select candidates medically classified as having mild forms of eczema will be processed for a waiver. Certain occupational restrictions may be applied to secure personal and mission safety.
• ADHD: Candidates who do not meet the standard of never having taken more than a single daily dosage of medication or not having been prescribed medication for their condition for more than 24 cumulative months after the age of 14 will be processed for a waiver if they have demonstrated at least 15 months of performance stability (academic or vocational) off medication immediately preceding enlistment or enrollment and they continue to meet remaining criteria as outlined in Defense Department Instruction 6130.03.
• Asthma: The Air Force will use the Methacholine Challenge Test to provide an objective measure of candidates with an ambiguous or uncertain history of asthma. Candidates who successfully pass this test will be processed for a waiver.
• Pre-accession marijuana usage: The revised policy will remove the service prescribed numerical limitations on prior use of marijuana when determining accession qualifications. In accordance with DOD standards, a medical diagnosis of substance-related disorders or addiction remains medically disqualifying for service. Additionally, any legal proceedings associated with pre-service use will continue to be reviewed and adjudicated separately and may be disqualifying depending on the nature of the offense(s). The Air Force will maintain a strict “no use” policy. An applicant or enlistee will be disqualified for service if they use drugs after the initial entrance interview.

The waiver process changes are effective immediately. The Air Force continues to work with the Office of the Secretary of Defense and the other services to review existing medical accession standards to allow the highest number of qualified individuals possible to serve.

“Among the fundamental qualities required of our Airmen is being ready to fight and win our nation’s wars. These accession standards ensure we maintain our high standards while bringing more consistency to our policies,” said Air Force Chief of Staff Gen. David L. Goldfein. “As medical capabilities have improved and laws have changed, the Air Force is evolving so we are able to access more worldwide deployable Airmen to conduct the business of our nation.”