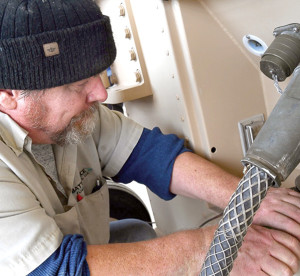 CREECH AIR FORCE BASE, Nev. — Behind the shadows of unparalleled MQ-1 Predator and MQ-9 Reaper operations stand men and women who once wore a military uniform, still contributing to the fight. They are retired Air Force members.

When one thinks of all the functions that go into supporting traditional airframes, it is easy to overlook the individuals who maintain the equipment crucial to the aircraft’s performance. Michael and Robert, two aerospace ground equipment mechanics, have dedicated their entire careers to managing essential MQ-1 and MQ-9 AGE and providing mentorship at Creech Air Force Base, Nevada.

“Our job is to support approximately 100 pieces of AGE from generators that support ground control stations to power carts that start the aircraft,” said Michael. “This weapon system is unique because the aircraft is remotely piloted, so the GCS is the cockpit on the ground.”

These veterans continuously observe and provide proactive maintenance even after the aircraft leaves the ground, a task that isn’t typical of AGE mechanics. Two MQ-1s and six MQ-9s depend on their equipment.

Backup generators provide power in the event the GCS loses commercial power and the global data transmitter towers are used to launch and recover the MQ-1 and MQ-9 aircraft.

“We’re responsible for the preventative maintenance with that (GDT) tower and maintaining the two air conditioners and the generators on the GCS,” said Michael. “You can’t launch those aircraft without AGE.”

Due to the amount of electricity running in a GCS, it requires the air conditioning unit to function properly at all times. It has to stay within a specified temperature range to keep the electronics from overheating.

Michael said AGE is used to perform every maintenance check, procedure or emergency call, both stateside and abroad.

“I still feel like I’m active duty because we work so close with military members every day,” Michael said. “Not only do we maintain operations here at home station, but we also deploy to several combat zones. If we weren’t doing that, the responsibility would be solely shouldered on the Airmen here. I would like to think that we’re the guys on the bench, so that when they need a relief, we can take over for them.”

Michael said the satisfaction he gets knowing he’s positively affected Airmen and young mechanics makes his job all the more worthwhile.

“Whenever I can take a young mechanic and I can use my experience to help them succeed and watch them surpass the teacher is a reward in itself,” said Michael.

Both retired AGE flight chiefs for the 432nd Maintenance Squadron, Michael and Robert still pass their knowledge to curious Airmen who are looking for AGE advice on being downrange.

“I’d like to think that we’re kind of a liaison to the Airmen here,” said Robert. “They come over and ask for advice on some of the things we’ve seen and done.  I feel like we prepare them better for what they can expect when they deploy and how to fix certain problems.”

Both men say they still stop by their old squadron to reassure old colleagues they’re available for support if needed.

“AGE is a tight-knit community,” Michael said. “We’re a band of brothers and when we’re out in the field deployed, we come together to help each other out with hard trouble-shooting problems, experience and loyalty.”

Combined, these two share a total of 55 years of military experience and 27 deployments, most of which was forged serving actively at Creech.

Robert said he began his MQ-1 career as a senior airman when he was assigned to the 11th Attack Squadron, formerly known as the 11th Reconnaissance Squadron. He was the first AGE mechanic assigned to work on MQ-1 equipment back when the base was known as Indian Springs Auxiliary Airfield.

“I was assigned here in July of 1998,” Robert said. “When I first got up here everything was in trials. We had to write a lot of the programs and testing procedures. We also had to write technical orders for equipment that weren’t in the Air Force supply system, so it was learning by trial and error and with our policies we’ve come to adapt to this day.”

Robert said he takes a lot of pride in having a hand in developing guidance on the equipment for the MQ-1.
Both Robert and Michael agree the pride they have in supporting the mission comes from knowing that the warfighters are able to carry out operations.

“I would say thank you to them (pilots and sensor operators) because they are the ones who are executing the missions downrange,” Michael said. “They save lives.”

As the sun sets on Creech, two retired AGE mechanics leave for the day knowing the MQ-1s and MQ-9s that depend on their equipment are in the sky because of their efforts and their dedication to the mission.