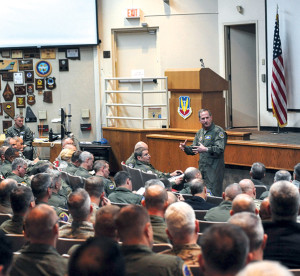 Air Force Chief of Staff Gen. Dave Goldfein delivers the keynote address during the 2017 Weapons and Tactics Conference (WEPTAC) at Nellis Air Force Base, Nev., Jan. 12. WEPTAC, sponsored by Air Combat Command, brings together hundreds of warfighters from around the Air Force to discuss current issues, examine possible issues of the future, and provide solutions for joint employment of forces.

WEPTAC, sponsored by Air Combat Command, brings together hundreds of warfighters from around the Air Force to discuss current issues, examine possible issues of the future, and provide solutions for joint employment of forces.

Air Force Chief of Staff Gen. Dave Goldfein attended the conference and delivered the keynote address, during which he shared his thoughts on four future attributes of warfare.

“Our enemies are not paying attention to our combatant commander maps,” Goldfein said. “We have to be thinking about this fight that’s coming our way as a transregional fight and how do we get in the business of being chess masters and not just in the business of checkers… Which brings me to the second piece; the fight will be multi-domain, and when I talk about multi-domain this is all domains — air, land, sea, space, cyber and subsurface. We have to be able and ready to produce a joint campaign plan that leverages the strengths of all.”

The CSAF then spoke about how the U.S. will take a combined approach to future conflict and the speed at which a future fight would happen.

“The reality of warfare in the Information Age is that it will be faster than we’ve seen before,” Goldfein said. “So the victor of future conflict, in my personal opinion, will be that individual or commander who can command and control his or her forces to produce multiple dilemmas in multiple domains, and is someone who understands the business of global chess so they can deny an adversary the ability to do the same.”

Goldfein then spoke about his three “big rocks” or key focus areas — revitalizing squadrons, strengthening how the Air Force develops joint leaders and teams, and multi-domain command and control — which he said will create joint warfighting excellence if stitched together properly.

“We produce multi-domain effects all the time, but what we want to get to is seamless integration so that the space, cyber and air domains work together seamlessly so that it doesn’t become a special event that you have to plan for specifically,” Nowland said. “That’s why events like WEPTAC are so important, because the only way we can achieve that objective is by working together. What I like about WEPTAC is it’s a chance to share information and find out what’s truly going on in the field so we can take those issues and work to make them better.”

During the two-week conference, hand-selected teams of weapons officers gather to troubleshoot current air, space and cyber challenges during the Mission Area Working Group; a Tactics Review Board meets to improve current tactics, techniques and procedures using creative, cost-effective solutions; and a command and control summit is held to discuss solutions and implementation plans.

“Confidence under fire is what I think we get out of this, so you can bet I’ll be the biggest advocate for the conference during my tenure as chief,” Goldfein said.