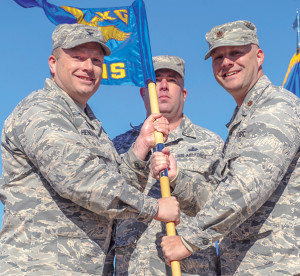 NELLIS AIR FORCE BASE, Nev. — A little more than seven years after it was designated as the 57th Maintenance Squadron, the squadron was inactivated.

On Jan. 27, all of its former Airmen stood up the newly activated 57th Munitions Squadron during a redesignation ceremony, here.

Col. Shane Henderson, 57th Maintenance Group commander and the ceremony’s presiding official, spoke about how the redesignation came to be and how it better aligns the squadron with its primary mission.

“The purpose of the closures were to provide Airmen back into combat-coded units due to budget cuts,” Henderson said. “So the 57th MXS hit the ground running and didn’t look back.”

“While doing this, Ammo received 12,500 inspections with a 92 percent pass rate. Additionally, the munitions flight is the largest and most dynamic in Air Combat Command producing 34 percent of ACC’s total expenditure value and 19 percent of total munitions expended,” Henderson said. “Our maintenance professionals in PMEL performed over 72,000 maintenance actions and over 1,800 inspections with a 93 percent pass rate — supporting those same Nellis missions that I outlined for Ammo — as well as being the regional hub for test and calibration efforts.”

After the 57th MXS guidon was furled and encased and the 57th MUNS guidon took its place among the squadron’s formation of Airmen, Zakri spoke to the crowd — which included Ammo veterans who served in the 57th Munitions Maintenance Squadron — and the Airmen of the newly reactivated munitions squadron.

“The squadron activation has been several years in the making and it is absolutely amazing to see it finally coming together,” Zakri said. “Beginning today, our Airmen promise to uphold the legacy of the 57th Munitions Maintenance Squadron by producing world-class fire power and system calibration. Fellow Mustangs, together we will continue to keep the peace by preparing for war.”