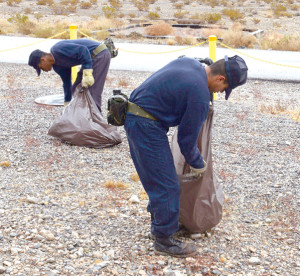 The program or “boot camp” is six months long and if an inmate successfully completes the program they may have their felony reduced to a gross misdemeanor or even expunged.

“The inmates from TLVBC perform no cost manual labor to assist the 799th SFS in maintaining ranges and military operations in urban terrain (MOUT) village,” said Capt. Chad, 799th SFS director of operations, “In turn, we provide general mentorship and motivational briefings at the conclusion of the day.”

According to David Gonzales, NDOC corrections officer, the program is no easy task. The participants are up at 4 a.m. every day and participate in physical fitness sessions three times a day.

“The inmates will get sentenced by their judges for 190 days of physical fitness, so when they get to our institution their days start pretty much when boots are on deck.” said Gonzales. “They get a haircut and their initial fitness testing just to see where they are at, so they do pushups, sit-ups, a two-mile run and pull ups.”

When the participants arrive at the boot camp they get four short days to learn the basic commands, such as facing movements and vocal commands.

Rigorous physical demands aside, thanks to the once a month mentor sessions the NDOC conducts in partnership with the 799th SFS, many of the participants are looking to enlist in a branch of the military service. 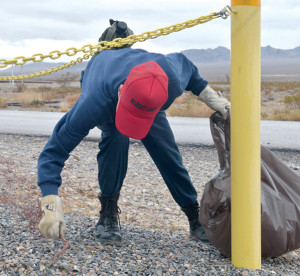 A Three Lakes Valley Boot Camp inmate performs manual labor near Creech Air Force Base, Nev., Jan. 13. The 799th Security Forces Squadron and the State of Nevada Department of Corrections, TLVBC have a cooperative agreement/outreach program and has already conducted four range clean up and mentorship sessions along with two PT sessions.

“All the things they have taught have opened more doors that I never would have thought of. If I can, I want to enlist in the military. I haven’t quite narrowed down what I want to do because I like culinary, so I want to be a cook, but then I also want to be a mechanic or do infantry.”

For Chad, he truly believes this is a great story to tell.

“Most of these inmates come from broken homes and never really had any type of positive role models in their life,” said Chad. “Many have expressed interest in joining the military during the mentorship sessions and one inmate that graduated the boot camp recently left for basic training.”

The 799th SFS has already conducted four range clean up and mentorship sessions along with two PT sessions, all with great success.