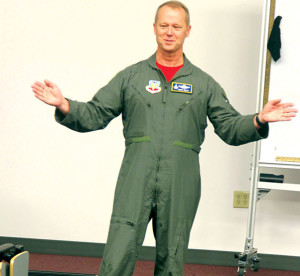 NELLIS AIR FORCE BASE, Nev — The U.S. Air Force Weapons School capped off the first week of a new class on Jan. 13 with a visit from the Air Forces Southern commander, who presented the initial Commandant Lecture Series (CLS) session of Class 17A.

Lt. Gen. Mark D. Kelly, commander of AFSOUTH and the 12th Air Force, Air Combat Command, as well as a 1996 Weapons School graduate, shared his experience and a few combat anecdotes. He emphasized that the weapons officers of Class 17A will need to be not only experts in the tactics of their specialty but also professionals highly skilled in integrating with and leading diverse teams.

“You will do the complex [Weapons School integration phases] to learn how to lead our nation’s most difficult combat events,” said Kelly. “Weapons officers are called upon to do the missions no one has ever thought of doing before.”

Kelly’s message exemplified the Weapons School’s intent for the CLS.

As a professional development initiative, the CLS layers leadership lessons from the day students start a class to integration and graduation. Speakers are scheduled once a month to reinforce leadership skills students gain as they move through the course.

“The desired end state is to go from a tactical small-team leadership dynamic within CLS that builds to strategic and transformational leadership that can create organizational change,” said Col. Michael Drowley, Weapons School commandant.

In the past, the Weapons School CLS sessions were open only to the students and cadre. In 2017, however, the Nellis community will have opportunities to hear the speakers’ presentations in other base venues. The speakers will include not only military personnel but also leaders from all walks of life, including sports, entertainment and corporate businesses.