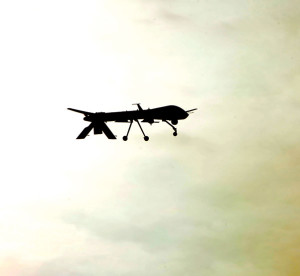 CREECH AIR FORCE BASE, Nev. — The MQ-1 Predator aircrew sat in the ground control station focused intently on their screens. Tension filled the air as they assessed the situation and began calculating the risks of destroying an armored vehicle suspected of carrying explosives.

The remotely piloted aircraft crew started their shift the same as any other, attending the crew brief before flight. As they arrived in the GCS, the battle environment was changing, thrusting them into a life-or-death situation.

“When we first got in the seat we checked in with our coalition forces on the ground and received an update on where they were,” said 1st Lt. Matthew, 15th Attack Squadron MQ-1 pilot. “Keeping them safe was our primary focus.”

The crew began scanning the local area, gathering intelligence and becoming familiar with the terrain of the town.

The vehicle in question stood out due to its armored plating, covered wheels, tires and protected windshield. This was an indication to the crew of a vehicle-borne improvised explosive device.

“We relayed this information to the friendlies so they could take as much action as possible, however, based on the speed, we knew they may only have a few minutes until this ‘Mad Max’ looking vehicle, as we called it, would reach them,” Matthew said. “That’s when we had to take action.”

In under two minutes, the crew coordinated and made the decision to fire an AGM-114 Hellfire missile at the vehicle.
The GCS filled with the sounds of confirmations and the relaying of messages.

The missile hit, a clean shot.

The explosion from the missile, normally about four meters wide, washed out their entire screen. The explosives within the vehicle combined with the Hellfire resulted in a 400-meter blast radius, the equivalent of four football fields.

“We stopped the vehicle about a mile away from friendlies and it would have been about a minute until friendly forces came into contact with it,” Matthew said. “Afterwards we made sure all of our friendly forces were OK. We had around 800 to 850 friendlies on the ground including coalition, U.S. and indigenous Iraqis.”

This particular engagement was special to Matthew because he knew he was responsible for so many friendly forces and he knew after the impact, without them, the ground troops would have had no way out.

“Immediately after, the response was actually a sigh of relief, moving targets are the hardest to hit,” Matthew said. “After we checked on friendlies it was another relief knowing they weren’t hurt in the explosion. There’s satisfaction in knowing they could fight another day, as well as, having the opportunity to go home to their families.”

In the MQ-1, MQ-9 career field, operators are able to return home after every shift and be with their loved ones, but for the ground forces overseas, it can be weeks to months before they see their families.

“Anything we can do to make their life easier, to have their days a little bit easier because they know we’re overhead looking out for them, to me, that’s all that matters,” Matthew said. “This job is unique, there is no better feeling than walking away day in and day out knowing you made this kind of impact.”