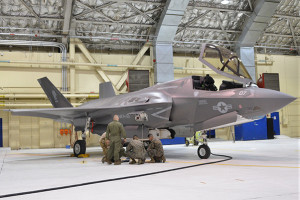 On any giving day at Joint Base Elmendorf-Richardson, Alaska, you can hear sound of freedom as the F-22 Raptors circle the mountains and come in for a landing. There was a different tone to that sound Jan. 9, 2017 as the Marine F-35B Lightening II fighter jets joined the orchestration.

“There aren’t a lot of firsts in the world; they happen once and that’s it and it’s always amazing when you see it first-hand,” said 477th Fighter Group Commander, Col. Christopher Ogren.

JBER got the rare opportunity to be part of one of those historic moments last week when the crew from Marine Fighter Attack Squadron 121 stopped by with their F-35Bs while transitioning from Yuma, Ariz., to Japan.

“This operation is good for the F-35 and its crew to experience the harsh environment of Alaska,” said Marine Staff Sgt. Andre Villanueve, F-35B maintenance control member. “Joint Base Elmendorf-Richardson is a great base, the Air Force took care of our crew and our aircraft.”

“This is a first for an operational F-35 squadron in Alaska,” said U.S. Marine Staff Sgt. Cassidy Cleinmark who works as an F-35 Avionics Maintenance Control Marine. “This is an unprecedented movement for the F-35 operational unit.”

The F-35 is the newest aircraft to enter the world of fighter jets, and fifth-gen fighters aren’t new to JBER. The last time a new aircraft entered the JBER Airspace was the F-22 in August, 2007, when the base became the first Pacific Air Forces installation to receive the Raptor which joined the 3rd Wing and Air Force Reserve Command’s 477th Fighter Group.

Master Sgt. Mark Ling, who works as an F-22 expediter for the 90th Aircraft Maintenance Unit, was one of the first 477th Fighter Group aircraft crew chiefs that worked on the F-22 Raptor.

“In 2007, the F-22 Raptor was the aircraft maintainer’s top choice to learn and work on,” he said. “It was a new jet that we all knew would change the fighter world forever. Even ten years later, it is still an exciting state-of-the-art aircraft to work with.”

Fast forward to 2017 and JBER can add the F-35B transition pit-stop as another series of aviation firsts.

“As a Plane Captain, I make sure the aircraft is safe for flight, including the fuel systems, propulsion, pre-flight inspection and aircraft marshaling,” said Marine Cpl. Alexander Noonan a Powerline Marine, similar to our Air Force crew chief mechanics. “I like the F-35; it is relatively easy to work on, with good contractor support. The capabilities of the F-35 are impressive, it combine’s legacy aircraft into one.”

While most crew chiefs in the Air Force, and across the military, work on legacy aircraft that have accomplished many missions, those working on the new fighters have a different perspective. Marine Staff Sgt. Cassidy Cleinmark, who has eight-years of experience with Marine avionics and maintenance control said he enjoys working with the F-35, getting to see the big picture of where the future of aviation is going.

“The F-35 is ten-fold better to work with that any aircraft I’ve been assigned to, maintenance is less in-depth than legacy aircraft and more innovative.”

According to the article on Marines.mil, titled “VMFA-121 departs for relocation to Japan” dated Jan. 10, 2017, the VMFA-121 transition from Marine Corps Air Station Yuma to Marine Corps Air Station Iwakuni marks a significant milestone in the F-35B program as the United States continues to lead the way in stealth fighter attack aircraft advancement.