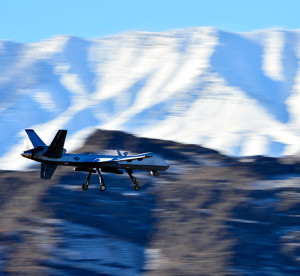 This was the first time the MQ-9 and F-35A Lightning II have integrated in a Red Flag.

“Specifically for this Red Flag our desire and objectives were to integrate in combat search and rescue missions,” said Capt. Joseph, 42nd Attack Squadron pilot. “We wanted to demonstrate that we are a capable and feasible aircraft to provide on-scene command during a CSAR event.”

While the MQ-9 provided their capabilities, the F-35 provided defense for the MQ-9 aircrew.

“The F-35, on the times we worked together, provided suppression of enemy air defense and coverage in order to execute our mission,” Joseph said. “They would take out any surface-to-air missiles or air-to-air threats, protecting us (if needed).”

During the exercise the MQ-9 crews and F-35 crews were learning about how to integrate with each other. 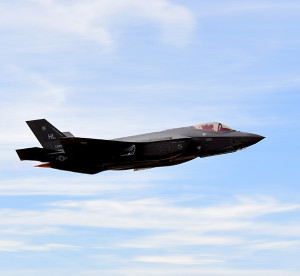 An F-35A Lightning II takes off for a training mission as part of Red Flag 17-1 Feb. 2, 2017, at Nellis Air Force Base, Nev. During the exercise, the F-35 provided suppression of enemy air defense for the MQ-9 Reaper.

“The biggest education point was how to communicate effectively to each other what our desires are and how to get the same results,” Jacob said.

Jacob said while they are unfamiliar with the F-35 as a weapons system because they are so new, the overall combination was a success.

“Overall the integration went very well,” he said. “They gave us a lot of security while we accomplished our mission.”

During the exercise, MQ-9 crews also provided simulated munitions to take out simulated ballistic systems and eliminated enemies approaching a downed pilot during a CSAR mission.

“Exercises like Red Flag shows the Combined Air Forces that we bring a lot to the fight and show how we’re able to integrate in a strike package,” Jacob said.