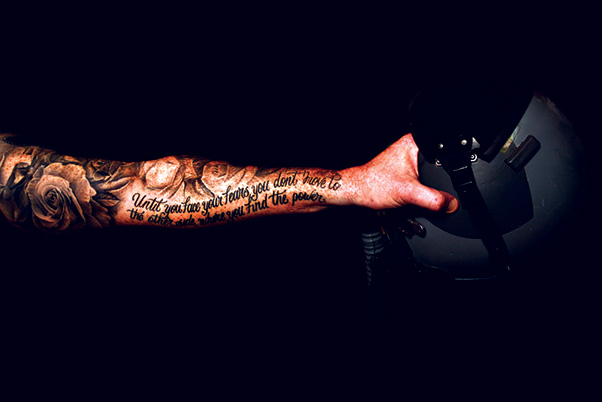 Maj. Matthew, 432nd Wing/432nd Air Expeditionary Wing Commander’s Action Group chief, displays his tattoos Jan. 26 at Creech Air Force Base, Nev. The roses on his arm represents natural beauty and the quote ‘Until you face your fears, you don’t move to the other side, where you find the power’ references a book about the Ironman Triathlon and is key to keeping him motivated during his own training. An updated tattoo policy has taken effect as of Feb. 1, 2017, and is key to the recruitment of the nation’s top talent.

CREECH AIR FORCE BASE, Nev. — Culture is an ever-changing manifestation of arts and intellect. It allows for people of all shapes, ethnicities and backgrounds alike to express themselves through tattoos where their pride, beliefs or imaginative elements are forever inked on their skin.

For approximately 20 years, the Air Force reinforced a policy that prohibited excessive tattoos. Airmen or those interested in pursuing a career in the Air Force were not allowed to display a body marking that exceeded 25 percent of an exposed body part. However, as of Feb. 1, 2017, a new policy is in effect in order to expand the eligibility for future Airmen to serve and to retain the nation’s best.

The policy eliminates the 25 percent rule and removes size limitations to tattoos on the chest, back, arms and legs. It provides a clear definition of prohibited tattoos on the neck, face, head, tongue, lips and/or scalp. It also limits hand tattoos to one single-band ring tattoo, on one finger, on one hand. It grandfathers in serving Airmen who are in compliance with the previous hand policy.

Creech Air Force Base is full of active duty members with tattoos who are excited about the new policy and what it means for the future.

As the change does represent a younger demographic, it also shows the Air Force’s flexibility in its continued endeavor to evolve while adhering to core values.

“A lot of people like to distinguish others who have excessive tattoos as bad people, but I know a lot of good guys who would’ve joined but couldn’t because of the tattoo regulations at that time,” said Senior Airman David, 799th Security Forces Squadron alarm monitor.

David predicts the change will help further the diversity of the Air Force working environment and, ultimately, strengthen air power. 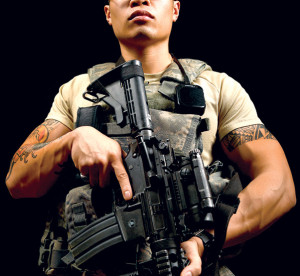 Senior Airman David, 799th Security Forces Squadron alarm monitor, displays his tattoos Jan. 26, 2017, at Creech Air Force Base, Nev. The flowers on his arm represent the five women in his family, each tattoo being their favorite flower. While his tattoos previously may have been considered excessive, a new tattoo policy has taken affect as of Feb. 1 and is based on the Air Force’s need for continued outreach and to maintain and expand recruiting potential.

To continue as the world’s best Air Force, it is imperative to reach people from all parts of society and upbringings.

“It was hard growing up,” said Senior Airman DelAngel, 432nd Wing administration journeyman. “My mom was a single mother with four children and we were brought up well thanks to her hard work. I lived in a Milwaukee city, known as mini Chicago, where many people go down the wrong path.”

DelAngel said his tattoos reflect his hard work and ability to persevere and better himself, an ability that was fostered from admiring his own mother’s determination and growing up in an unpredictable neighborhood.

Among his tattoos, the phrase ‘Eat or Starve’ spans across his forearm.

“It’s funny when some people ask what my tattoo means, because if I saw this tattoo on someone else I would know right away,” DelAngel said. “Obviously if you don’t eat, you’ll starve, but it’s deeper than that. I know people who aren’t working toward their goals or doing anything with themselves. They’re not eating. If you don’t work hard toward your goals then you might not get anything. I think my tattoos show the urban part of the city and culture that I grew up in.” 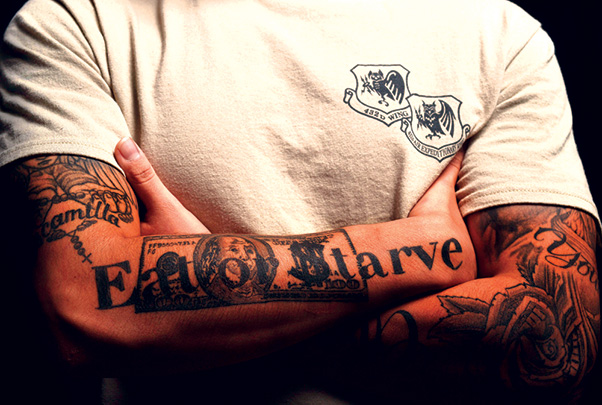 Senior Airman DelAngel, 432nd Wing administration journeyman, displays his tattoos Jan. 18, 2017, at Creech Air Force Base, Nev. As of Feb. 1, a new tattoo policy has taken effect as a result of the Air Force’s efforts in broadening the pool of applicants and retaining Airmen. DelAngel believes his ethos, ‘Eat or starve,’ represents his hard-working mentality and culture.

DelAngel’s dream is to serve, retire after 20 or more years, and then become a successful realtor. He hopes others who may have grown up under similar circumstances, now, get the chance to serve in the Air Force to pursue their own goals.

“I think it allows us to be individuals, bring our own mindset to the table and our own history, values and thoughts to accomplish the mission,” DelAngel said. “Now that the Air Force is open to those who may have what used to be thought of as excessive tattoos, I think we’re exposing ourselves to new ideas from the different corners of the world, socially and culturally.”