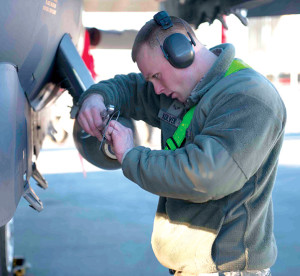 Three-man load crews from the seven aircraft maintenance units assigned to the 57th Maintenance Group convened on the flightline here to compete in the annual weapons load crew competition Jan. 27.

The purpose of a load crew competition is to recognize superior performers, as well as help keep weapons loaders’ skills sharp and ready for real-world situations.

To be chosen for the annual competition is no easy task.

Once selected, each competition consists of a written test, dress and appearance inspection, composite tool-kit inspection, and finally the load competition.

“It is a two-day event in which both days we get them started very early,” Swanson added. “Day one, the Airmen start with a uniform inspection promptly at 7 a.m. This inspection is conducted by different first sergeants each time.

“Next the crews break up and take their individual tests in separate locations. While all of this is going on the weapons standardization personnel are working alongside quality assurance personnel to inspect the composite tool kits. The next day we start them with the load competition.”

During the load competition they must safely and reliably load all munitions designated on to their supplied aircraft. They must do this within the time limit specified in the regulations. Each categories score is then added together to make the overall score and the crew with the highest score wins the competition. 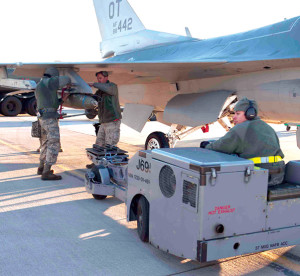 A three-man load crew loads a munition during the annual load crew competition at Nellis Air Force Base, Nev., Jan. 27. The annual competition is always more complex than the quarterly making the loads more difficult and longer execute.

Not only do the competitions recognize superior performers and help keep weapons loaders’ skills sharp, they also increase moral.

“I believe the competitions increase morale because the crews get a chance to become the undisputed 57th Wing champion,” said Master Sgt. Benjamin Thomas, 57th MXG weapons standardization NCO-in-charge. “In addition, all members of their respective units are in attendance and get to show their unit pride by cheering on their best load crew.

“Load competitions have been around as long as I can remember,” added Thomas. “It was instilled in me as a young loader that getting to compete in a load competition and winning is the ultimate goal. Weapons loaders are inherently competitive and have pride in what they do.”