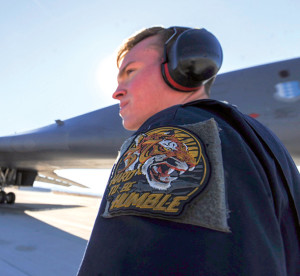 NELLIS AIR FORCE BASE, Nev. — The engines from two powerful bombers hum at an even pace as one of the most essential airframes in the U.S. Air Force’s arsenal, the B-1B Lancer, prepares to takeoff.

As the pilots of the B-1 perform interior checks, Senior Airman Jacob Widtmannheiser, a crew chief assigned to the 28th Aircraft Maintenance Squadron at Ellsworth Air Force Base, South Dakota, displays his squadron patch on his arm.

Written on the patch: “Hard to be Humble.”

For the Airmen of the 37th Bomb Squadron at Ellsworth AFB, this motto is one that’s hard to shy away from.

Since its inaugural flight on Oct. 1, 1986, the B-1B has been a work horse for the Air Force. The airframe holds records for speed, payload, range and time of climb in its class, and it brings all those talents to integrate with fifth-generation fighters during Red Flag 17-1 on Nellis Air Force Base, Nevada.

“For Red Flag 17-1, the B-1 was the only bomber so our primary responsibility was strike, but we also fulfilled other roles as well,” said Jeffrey Spinney, 34th BS assistant flight commander for weapons and tactics. “Through the use of our sensors, we were able to provide a back fill to ISR (intelligence, surveillance and reconnaissance), RESCORT (rescue/escort), and targeting as well. Since the fighters have a limited number of bombs, we’re able to carry a larger payload and our primary role was attacking targets.”

During the three-week exercise, the aircrew from Ellsworth AFB were faced with many challenges, including a new avionics system and also integrating with a new fifth-generation platform for the first time in Red Flag.

“This Red Flag was unique. The B-1 is going through a significant upgrade to our avionics so the biggest thing that we took away from this Red Flag is Link 16,” said Spinney. “It allows our jet to be interconnected with all of the other package players. If you look at when our program started in the 1980s, and it has gone through many upgrades, but this has been the most significant shift. When integrating with fifth-generation assets, the capability to be on that Link 16 and have those avionics brings us forward into the 20th century. There were many lessons learned and it was valuable to be able to work with them on that top-tier level.”

Getting to the top tier has been a lengthy process, and with months of work taking place before Red Flag, the 37th BS is ready to test and show off their new upgrade.

“For our squadron, we’ve been training for seven months on the new aircraft,” said Spinney. “We’ve used this Red Flag as a capstone of sorts to validate the 37th BS capability with the airframe and new Link 16 system.”

The system isn’t the only new thing for the B-1 during Red Flag. In addition to this system upgrade, the first ever Air Force F-35 squadron also participated in Red Flag 17-1.

“We’re integrating with the F-35. It’s the new kid on the block, but our tactics remain the same,” said Spinney. “The ability for the F-35 and rest of the fifth generation to go a little bit further than everyone else gives us a little more. In terms of our overall tactics, other than an increased capability, we don’t shift them. Which is good, because we don’t have to reinvent the wheel and we just get that increased capability with the F-35.”

While both of these factors — the system upgrade and new fifth-generation airframe — served as tests for the 37th BS, the squadron took them in stride and Red Flag successfully.

“Our squadron is chalking this up as an outstanding victory. This is the first time that the 37th BS used the new airframe with the avionics upgrade,” said Spinney. “Our intelligence won the ‘Outstanding Unit Intelligence Award’ so they received a lot of great training out of the exercise. The maintenance unit also won the ‘Outstanding Maintenance Unit’ of Red Flag as well. It’s been a big win for us to all come together and integrate with fourth- and fifth-generation assets.”

Overall, the entire crew from Ellsworth AFB took their motto to heart during Red Flag 17-1, and will have even more trouble being humble.

“I know what the B-1 is here to accomplish, and it makes me proud to be a part of getting that jet in the air knowing what it’s capable of,” said Witmannheiser.