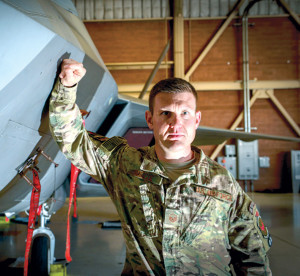 Master Sgt. Christopher Boscoe, 57th Aircraft Maintenance Squadron F-22 weapons section chief, poses for a photo after being awarded the Bronze Star Medal at Nellis Air Force Base, Nev., Feb. 14. He was awarded the medal for his actions as a weapon system advisor in support of Operation Freedom Sentinel at Forward Operating Base Oqab, Kabul, Afghanistan, from Oct. 4, 2015, to Sept. 28, 2016.

He was awarded the medal for his actions as a weapon system advisor in support of Operation Freedom Sentinel at Forward Operating Base Oqab, Kabul, Afghanistan, from Oct. 4, 2015 to Sept. 28, 2016.

“Being the fourth highest individual military award, I’m humbled to be considered a peer amongst Bronze Star recipients who’ve come before me,” said Boscoe. “Understanding the history of the award, the level of dedication, commitment, and sacrifice displayed by its recipients is profound.”

During his time at FOB Oqab, the base was under constant threat of insider attack and was subjected to three indirect fire rocket attacks and two vehicle born improvised explosive devices. Boscoe routinely left the safety of the base to advise the Afghan armament and munitions commanders, and subordinate weapons manager as he trained and certified the first ever A-29 load crew on loading the Mk-81, Mk-82, GBU-12 and GBU-58 bombs.

“Adapting to the difference in environment from life at home to the stressors in Kabul, Afghanistan happens immediately for many Airmen,” said Boscoe. “The intensity is very satisfying, but starts to become exhaustive over time. We would focus on small pleasures, like certain foods scheduled for specific days of the week at the DFAC, and mail time to take us away from the constant focus of work.

“Knowing the impact that our daily accomplishments had made tough obstacles easier to endure,” he continued. “Often hearing that the President was briefed on the status of our work gave us a feeling not easy to describe. The Afghan air force and Afghan Nation Army general officers, commanders, leaders and soldiers would personally thank me almost daily for helping them make their country better. It was the highest honor I received during my deployment.”

The work he did while in Kabul was pivotal in the A-29’s commencement of combat operations within the first three months in Afghanistan.

He also traveled to the Afghan military installation Jalalabad to assess MI-17 munitions operations and to address concerns of their malfunctioning GSH-23 gun pods.

He forward deployed to Mazar-e-Sharif where he crafted the layout of the Afghan A-29 combat parking areas and ten explosive storage earth covered bunkers while coordinating an interim munitions storage and aircraft parking with the German air force.

His involvement enabled the shipment of more than 700,000 pounds of munitions to immediately start combat operations in the heavily contested Kunduz providence.

“The fact that there was always uncertainty and to live in those conditions and power through to do all the great things he did for our country over there made a true impact,” said Brig. Gen. Jeannie Leavitt, 57th Wing commander.

He was instrumental in the planning and design of the A-29 and MD-530 operating locations in Kandahar. Working with Combat Joint Engineering, he shaped the combat aircraft parking area, munition storage are and a bomb build pad. Opening a second A-29 operating location ensured the aircraft could strike any target in Afghanistan under all conditions.

“I witnessed a tier of character within Airmen, soldiers, and NATO military members that is rarely seen outside this environment,” said Boscoe.

“It was this fortitude that allows the mission to happen, not just the tenacity of a single individual,” he continued. “I also witnessed the ultimate sacrifice. A close friend whom accompanied me during the Air Advisor Academy, Combat Skills Training and then onto our forward deployment, Master Sgt. Gregory Kuhse, was killed on duty.”