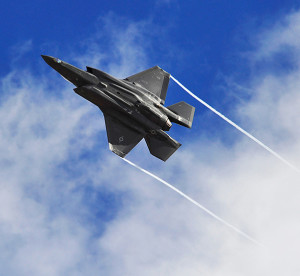 Production of the F-35 Lightning II joint strike fighter is on a good trajectory and is a necessary aircraft in the military’s arsenal to battle high-end threats, service leaders told a House Armed Service Committee panel Feb. 16.

The program’s development, production and sustainment have made significant and solid progress, Bogdan said.

“The fleet is rapidly expanding and we’re flying F-35s in the United States, Italy, Japan and Israel as we speak,” he said. “The development program is nearing completion within the cost and schedule boundaries put in place in the 2011 rebase line. And the program is also continuing to successfully ramp up production and accelerating a standup of our global enterprise.” The general said today’s F-35 program is much different than it was five years ago when he became the program executive officer. It now has a fleet of more than 210 airplanes that have surpassed 73,000 flight hours.

Operational, combat ready
The weapons system is considered operational and combat ready by the Air Force and Marine Corps, Bogdan said, adding, “It is also forward-deployed today in Iwakuni, Japan, for the U.S. Marine Corps and operated in Israel and Italy by those F-35 customers.”
The price tag for an F-35A model costs is about $94.5 million today, marking a first in costing less than $100 million, he said.
“We believe we are on track to continue reducing the price of the F-35 such that in [fiscal year 2019], with an engine including all fees, the F-35A model will cost between $80 million and $85 million,” Bogdan said. “As part of this reduction, we have initiated a block buy strategy for our foreign partners and an economic order quantity contracting strategy for the U.S. services.”

Driving down F-35 costs
The overarching priority is continuing to drive costs down in the F-35 program while delivering full capability to the warfighter, he said.

“We will continue to execute this program with integrity, discipline and transparency and I hold myself and my team accountable for the outcomes on this program,” Bogdan told the panel. “Our team recognizes the great responsibility we’ve been given to provide the foundation of future U.S. and allied fighter capability for decades to come.”

“The F-35B and the F-35C remain a top acquisition priority for the Marine Corps,” Davis said.

He said he is becoming increasingly convinced the F-35 is a game changer and a war winner, and added the Corps “can’t get those airplanes in the fleet fast enough to replace our F-18s and our Harriers,” which on average are 22 years old.

With the fifth-generation F-35, “We’re achieving astounding results in the highest threat scenarios and that across the range of military operations fight, with the F-35. It is changing things in a very decisive way,” Davis said.

“The F-35C will form the backbone of Navy air combat superiority for decades to come,” he said, adding its unique capabilities can’t be matched by modernizing the F-35 fourth-generation aircraft.

With the F-35, the carrier strike group of the future will be more lethal, survivable and able to accomplish the entire spectrum of mission sets to include immediate response to high-end threats, the admiral said.

The nation needs the capabilities of the F-35C on its carrier flight decks, Miller said. “The aircraft’s stealth characteristics, long-range combat identification and ability to penetrate threat envelopes while fusing multiple information sources into a coherent picture will transform the joint coalition view of the battlefield.”

Harris said the airplane is doing exactly what the military needs it to do.

“The final F-35A fleet is growing and will become a dominant force in our fifth-generation arsenal, deterring potential adversaries and assuring both our allies and our partners at the same time,” the general said.