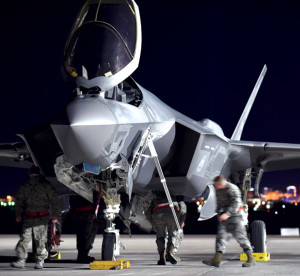 Maintainers from the 419th and 388th Fighter Wings conduct preflight checks on an F-35A Lightning II from Hill Air Force Base, Utah, during Red Flag 17-1 at Nellis Air Force Base, Nev., Jan. 24. Airmen from the active duty 388th FW and Air Force Reserve 419th FW fly and maintain the Lightning II in a total force partnership, capitalizing on the strength of both components.

This year’s first Red Flag, 17-1, at Nellis Air Force Base, Nevada, has today’s Intelligence, Surveillance and Reconnaissance warriors thinking about the many kinetic, or traditional weapon, and non-kinetic, information warfare, effects they can produce in battle scenarios.

When training for war, in addition to the physical effects from bullets and bombs, there can also be battle damage results involving technology that are not so clearly seen, said Lt. Col. Neal, 25th Air Force operations division chief.

“In the past, the non-kinetic effects were not fully integrated into the kinetic fight,” Cole said.

“This integration in an exercise environment allows our planners and warfighters to understand how to best integrate these, learn their capabilities and limitations, and become ready to use [these combined resources for maximum] effect against our adversaries,” he said.

“For example, think about the movie Blackhawk Down. As the U.S. task force was moving from the air base to Mogadishu, there were a number of spotters that alerted enemy forces,” Cole said. Consider if cyber was used to coordinate contact with the spotters and tell them to walk away or be targeted, he said.

A key component for coordinating all the different silent effects during battle is the non-kinetic duty officer.

“We are bringing the non-kinetic duty officers into the fight at Red Flag,” said Neal. “These experts in ISR and cyber warfare are the newest weapons in our command and control arsenal.”

“This course has proven its worth, as it not only provided curriculum bridging the air, space and cyber effects in warfare, but it also produced a multi-domain NKDO team readied for Red Flag 17-1,” said Joe Delgado, 25th Air Force ISR Operations Integration and Exercises deputy chief.

The 14th Air Force, 24th Air Force and 25th Air Force NKDOs, with coalition augmentation, are performing well ahead of week one Red Flag standards, according to Delgado.

At the end of 17-1, week one, 25th Air Force wings, including Air Force National-Tactical Integration Teams from the 70th ISR Wing, are having marked success and appear to be performing better than typical ISR participants, Delgado said.

“The plan is to utilize NCCT to coordinate multiple sources of intelligence for situational awareness or to take action,” he said. “Applying lessons learned from previous Red Flag events, NTI at 17-1 has excelled by reaching out to other ISR partners, such as the Distributed Common Ground Station, to ensure critical data is passed in a timely manner.”

“The realistic warfare challenges at Red Flag create an ideal environment for capabilities, like NCCT, to prove their worth in a time-sensitive, task saturated scenario involving the integration of multiple ISR assets,” Henderson said.

A typical Red Flag exercise involves a wide variety of aircraft, as well as ground-based command and control, space and cyber forces. It has expanded in recent years to include all spectrums of warfare, including command, control, intelligence, surveillance, reconnaissance and electronic warfare.