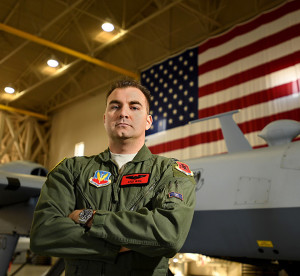 Capt. James, 432nd Wing/432nd Air Expeditionary Wing MQ-9 Reaper and MQ-1 Predator instructor pilot, stands in front of an MQ-9 Jan. 31, 2017, at Creech Air Force Base, Nev. On Aug. 11, 2016, James was off duty when he responded to a vehicular accident by taking initial control of the accident site and administering critical first aid, saving three lives.

The date is Aug. 11, 2016. Glass and debris lie scattered across the pavement amongst puddles of oil and brake fluid. The hiss of passing traffic mixes with slow, faint gasps for air as sweltering heat waves radiate across the Las Vegas highway.

A woman stumbles about, confused, an unresponsive man lies on the gravel and two other individuals sit motionless in a crushed automobile.

Upon seeing the crash, Capt. James, 432nd Wing/432nd Air Expeditionary Wing MQ-9 Reaper and MQ-1 Predator instructor pilot at Creech Air Force Base, Nev., zipped across the highway and charged to the scene where he would perform urgent first-aid procedures, control the incident site and ultimately save lives that day.

“When I got there, I saw a black SUV that impacted a concrete structural barrier for an overpass, head-on, at a high rate of speed,” James said. “I found Marco laying there face down and he was doing a kind of deathly breathing. He took a breath and then you wouldn’t hear anything for another 30 seconds. It’s your body’s attempt to keep you alive when you can’t breathe in response to trauma.”

James immediately resorted to the emergency medical kit he keeps on his person when traveling. In the kit were a nasopharyngeal airway, gloves, tourniquets and other supplies at the ready.

“I put the gloves on and I was able to establish an airway through his nose with the NPA tube,” James said. “Once I got that airway in, he started to breathe a little bit more regularly, which was really good.”

James went on to say it was around that time that an off-duty emergency medical technician showed up. He supplied the technician with an extra set of gloves, instructions to stay with Marco and moved to the next passenger.

“Chiarra, the second person ejected from the vehicle, was in shock,” James said. “She was standing there, shaking and then started walking around confused.”

James worked to calm the Italian, non-English speaking woman and with universal hand motions, successfully persuaded her to sit down for her safety. As more people began to surround the scene, he appointed someone to stay with her before he went to check on the driver.

“I went over to the driver side of the vehicle,” James said. “The window had been shattered with glass everywhere and the side-curtain airbag was out, so I lifted that up and was able to make contact with the driver. Virginia was her name.”

James found her completely entrapped in the wreckage. Virginia was pinned forward, against the steering wheel from the seat behind her and the airbag had deployed, James said. She had a lot of glass cuts and was bleeding on her face. Both of her legs were broken and crushed beneath the steering wheel.

“I reached in, grabbed her hand and I got her to look up at me and stay awake,” James said. “I started telling her who I was, that she was in an accident and that she was going to be OK.”

After James assessed the individuals in the vehicle, he instructed a female bystander to call 911 and relayed to her the information she needed to provide to the dispatcher. He told her where they were, the type of accident, how many people were involved, their injuries and the need for heavy rescue.

“As I’m talking to Virginia, she’s having a hard time breathing and she keeps trying to fall asleep on me,” James said. “I kept squeezing her hand, talking to her and tapping her on the face to keep her awake.”

Valerio, Virginia’s boyfriend in the passenger seat was screaming out in pain but in Italian. In an attempt to keep Virginia awake and reassure Valerio, James had Virginia translate his words of advice to Valerio.

About this time, more people began to stop and wanted to help. They started yelling, “Get him out of the car” referring to Valerio. James knew that since he was conscious and talking, moving him would only be more dangerous than waiting for the fire department. He yelled back at the bystanders and prevented them from taking him out of the car, which saved Valerio from further spine damage.

After a few minutes, an ambulance arrived and took Marco, who was in the worst condition by far, James said. As soon as the fire department arrived, the firemen brought out the Jaws of Life and worked to rescue Virginia and Valerio from the vehicle.

“I ended up staying there with Virginia for about 45 minutes, holding her hand while they cut the roof off the car,” James said. “Because the extraction was so long, they chose to land the helicopter on the freeway and take her to a local trauma center via helicopter. In the medical field, they talk about the ‘Golden Hour.’ There’s only one hour from when the incident or the trauma happens before you need to be in the hospital or your chances of survival diminish greatly.”

The victims were in the hospital for a while. Virginia, Valerio and Chiarra all endured a slow, but sure recovery. Marco was in the trauma intensive care unit for a few days before he passed away from his injuries.

“Although a tragedy for Marco’s family, his mother made the ultimate decision to donate his organs,” James said. “Several lives were saved as a result of her generosity.”

James still keeps in touch with Virginia and Valerio and talks to them often.

“They are really great people and I spent a lot of time with them in the hospital afterwards,” said James. “Just put yourself in their shoes.”

They were in a foreign country on a vacation taking a tour of the different landmarks and national parks. Two of them didn’t speak English very well and were in a fatal accident that took the life of one of their closest companions.

“That’s pretty scary, so I went to the hospital to spend time with them because I empathize with them in that,” James said. “I wanted them to know there was somebody here to talk to and that they’d be OK.”

Despite his efforts during the victims’ critical-hour window, James doesn’t want to be considered a hero.

“The heroes that day were the firefighters,” James said. “Those guys were out there working with every last drop of energy they had to save Virginia’s life and it was very impressive. I’m just a guy who was in the right place at the right time, who was equipped and had some training to help me do the right thing.”

James reinforced his own moral obligations led him to stop and take action on that day.

James believes the real difference one makes in life is the way they affect others. He made the decision to be the type of person who helps other people. The same resolve that guided him to take action that day is the reason he joined the U.S. Air Force and why he continues to serve his country today.