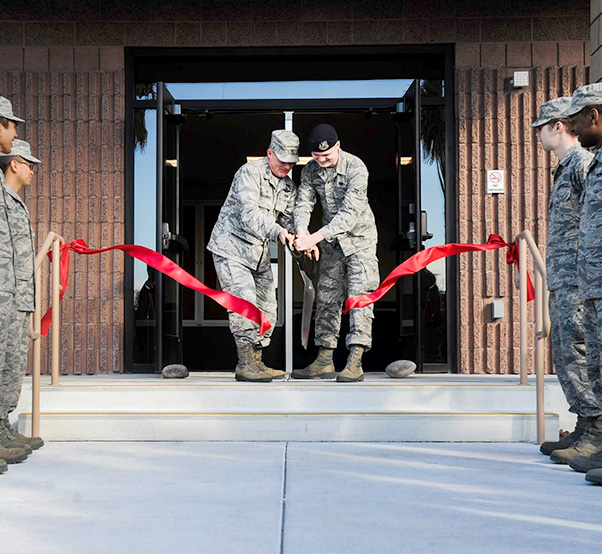 The new facility provides an improved quality of living with state of the art amenities than are not in the current dormitories on base.

“The new dorms will be in line with the ‘Dorm-4-Airmen’ living standards,” said Master Sgt. Henry Connell, 99th Civil Engineering Squadron dorm management superintendent. “The only other facility we have on campus that is commensurate to that standard is building 777, which houses our Creech Air Force Base Airmen.”

“Each common living area has a large kitchen and dining area, along with a washer and dryer, stove top, dishwasher, and high-end cabinet finishes,” said Henry. “In addition, all rooms are outfitted with high-end porcelain tile flooring, equivalent to what could be found in newer off-base condominiums.”

Along with the comforts that reside within the dorms themselves, the new dormitories also offer low cost energy saving features. 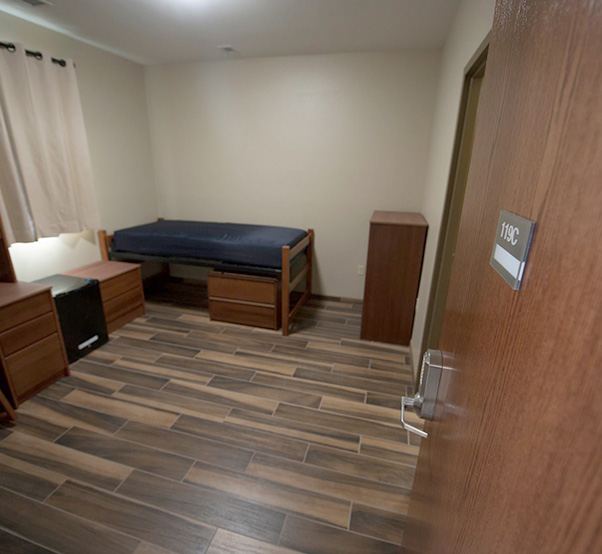 A dormitory room in the new facility on Nellis Air Force Base, Nev., is displayed after a ribbon cutting ceremony, Feb. 3, 2017. The 240-person facility has approximately 85,000 gross square feet with 60 four-bedroom/four-bathroom living unit modules.

“Another distinguishing feature of the dorm is the parking shade structures that have photovoltaic panels and solar water heating panels, which will help cut the dorm’s energy usage,” said Henry.

With all of these features being implemented into the new dorm, Airmen will have all of the amenities they need to see their quality of life improve.

“Currently, the majority of residents who are moving into the [new rooms] are living in dorms that were built in the early-to-mid 1970’s, so most residents are excited to reside in a facility that was built with the ‘Airmen’ in mind,” said Henry. “The facility is also outfitted with a basketball and volleyball court that will certainly be used by all Airmen on the campus.”

Since the new dorm was built with the Airmen’s needs taken into account, during the ribbon cutting ceremony, Murray spoke about how the facility is one representation of how leadership here is focusing on improving the quality of life and morale for Team Nellis dorm residents.

“This new facility serves as a representation of the dedication to the quality of life for Airmen that we have here,” said Murray.

The new dormitory on Nellis Air Force Base, Nev., opened after a ribbon cutting ceremony, Feb. 3, 2017. Each module has a large kitchen and dining area along with a washer and dryer, with the interior finishes that are equivalent to what would be found in modern off-base condominiums.