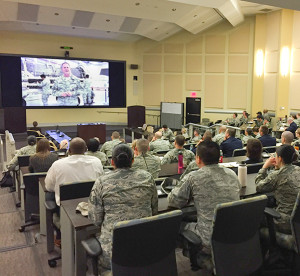 Airmen from Joint Base Andrews, Md., receive a briefing from Air Force Chief of Staff Gen. David L. Goldfein, to kick off a study on how to revitalize Air Force squadrons Feb. 23, 2017. JB Andrews was chosen as the first base to participate in a three-phase project to meet the chief of staff’s No. 1 focus area.

The Air Force District of Washington and Joint Base Andrews are on the leading edge of a chief of staff of the Air Force initiative that will impact the total force Air Force.

Air Force Chief of Staff Gen. David L. Goldfein stated in a letter to all Airmen dated Aug. 9, 2016, during his first month as CSAF, “The squadron is the beating heart of the United States Air Force; our most essential team.”

“This a chance for Airmen’s voices to be heard as we travel across the Air Force,” said Brig. Gen. Stephen L. Davis, the focus area lead – Revitalizing Air Force Squadrons team. “The visit to (JB Andrews) and AFDW has been particularly important because it gave our team a chance to test our approach with Airmen and make several adjustments that will pay benefits as we continue to conduct filed visits across the Air Force. The enthusiasm and support of the Andrews Airmen was remarkable.”

Among the dozens of AFDW and JB Andrews Airmen participating in this first field visit was Lt. Robin Danielson, who said he was excited for the opportunity for Airmen to have their voices heard and for the prospect of improving things for all Airmen, but especially for first-term Airmen.

“I would really hope something positive comes from this, like possible changes to improve programs or eliminate programs that just don’t work,” said Danielson, an emergency room nurse in the ER department at Malcolm Grow Medical Clinics and Surgery Center. “This is a tremendous opportunity to provide feedback about what can be fixed to make our processes better for the Air Force.”

A prior-enlisted troop who served five years in the U.S. Marine Corps, Danielson said he hopes the results from the process focus on first-term Airmen.

“We have to make things better for them so they will stay in and do their job with the highest morale possible … I’d love for them to enjoy every single moment and come out of the Air Force after their term, or stay an entire career with a positive attitude,” he said.

Danielson also highlighted the Airmen in the squadrons are the ones “doing the hardest jobs, making things happen,” and noted that they are the reason that squadrons succeed in accomplishing the mission, a sentiment shared by Col. Kim R. Brooks, the project manager – Revitalizing Air Force Squadrons team.

Consequently, a review of the squadron, and the support it receives, is necessary.

“The objective of this initiative is to discover big opportunities that will improve the squadron as the cohesive, ready and agile fighting force that the Air Force, combatant commanders and nation requires,” Davis said.

Further, he said, the Air Force-wide review will help determine how best to support a squadron, spread best practices and eliminate obstacles to success.

Eliminating obstacles to success is something Airmen like Tech. Sgt. David Patterson, of the 213th Maintenance Squadron, is looking forward to for his fellow maintenance Airmen.

“I hope this results in changes in Air Force Instructions and reducing regulation, where needed, and to see if they have a way to restructure in ways to better help us get our job done,” said Patterson, a 14-year veteran. “I hope they can streamline things even more. I don’t think there are any major problems — the Air Force is really good at doing what we do, but if we can make things better especially for newer troops coming in, to have a simpler, streamlined Air Force, that is what I think we need.”

The Revitalizing Air Force Squadrons team is tasked to:
• Identify and disseminate best practices
• Address issues identified by Airmen in the field to improve squadrons and squadron-like organizations
• Identify and eliminate impediments to mission success
• Ensure higher headquarters policies, processes and actions support squadron success
• Improve preparation and support for squadron leadership teams in all of their mission and force development responsibilities, including fun, family and culture
• Determine if squadrons are properly organized and resourced for their missions in the 21st century
• Determine if squadrons are properly sized and have the most effective total force and military/civilian mix to accomplish their missions
• Determine if decision authorities are at the right level for squadron success

The effort consists of three major phases: the analysis phase, to gather data; the review phase, to analyze data to generate recommended solutions; and the implementation phase to implement approved recommendations and track them to completion.

“The project team will turn meta-data, survey data, and field observations into conclusions and recommendations, resulting in a preliminary report outlining cost-effective, risk-acceptable actions the Air Force could implement effectively within most squadrons to meaningfully improve both current and future readiness, effectiveness and morale,” Brooks said.

Following the AFDW and JB Andrews field interviews, there will be follow-on visits at more than 20 bases, major commands and Numbered Air Forces through August 2017. The initial report with recommendations is expected in fall of 2017.

Looking forward to the initial report and its recommendations is Master Sgt. Mary Wise, of the 213th Maintenance Squadron.

“The goal is to be the best Air Force that we can be, and that involves constant change and constant evolution,” said Wise, a 15-year veteran. “We’ve seen the good, we’ve seen the bad, if we can help fix the bad we’ll be in a better place and leave the Air Force better for those who come behind us.”