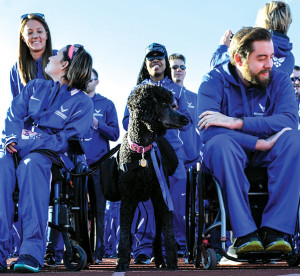 Competitors wait to be announced at the 2017 Air Force Wounded Warrior Trials opening ceremonies on Nellis Air Force Base, Nev., Feb. 24. The Trials are an adaptive sports event designed to promote the mental and physical well-being of seriously ill and injured military members and veterans.

These trials are part of an adaptive sports program, headed by the Air Force Wounded Warrior Program, designed to promote the mental and physical well-being of seriously wounded, ill and injured military members and veterans.

For months leading up to these trials competitors have focused on honing skills in their respective events, many struggling to overcome significant hardships and adversity, in the hope of ultimately earning a spot on the Warrior Games Team to represent the Air Force this June in Chicago, Illinois.

Among the distinguished guests in attendance was Maj. Gen. Peggy Poore, Air Force Personnel Center commander, who provided opening remarks and words of encouragement and praise to those competing.

“I want to thank everyone who came out here today; your support of these warriors is so deeply appreciated,” Poore said. “Standing here I am reminded of a quote from Gen. Douglas MacArthur who stated that ‘upon the fields of friendly strife are sown the seeds that upon other fields, on other days will bear the fruits of victory.’ While the victory he was referring to was one in war, here today we are speaking of the victory over a different type of battle – the battle to recover from a devastating illness or injury.

“The athletes here all share the bond of common experiences, and the very real and present challenge of recovery,” she continued. But on these fields and in these arenas over the next few days, these athletes will sow the seeds that will bear the fruit of victory of recovery, while they build confidence and camaraderie as they continue along that road.”

As members from team Australia, Great Britain and the Army helped pass along the torch, it was Air Force Tech. Sgt. Jason Caswell who officially lit the cauldron. Attendees then averted their attention toward the skies as two helicopters from the 66th Rescue Squadron performed a flyover that culminated with two pararescuemen repelling down onto the field to present Poore with the CareBeyondDuty flag.

“This flag is being presented on behalf of the Wounded Warrior Program staff and the more than 6,500 seriously wounded, ill and injured Airmen, their caregivers and families for recognition of Maj. Gen. Poore’s staunch advocacy and leadership since she took command of AFPC in 2013,” said Marsha Gonzales, AFPC Warrior Care Support chief. “Under her leadership, the program advocated for over $24 million in unpaid entitlements and benefits that will span a lifetime for these warriors and their families. Her steadfast leadership and dedication to the AFW2 mission exemplifies our program’s motto: To CareBeyondDuty.”