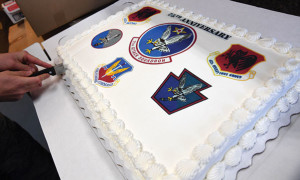 An Airman with the 11th Attack Squadron cuts into a cake March 3 at Creech Air Force Base, Nev. The 11th ATKS celebrated its 75th anniversary of providing America with key warfighting capabilities such as intelligence, surveillance and reconnaissance.

Despite its long history of distinguished and honorable service, the 11th ATKS’ current mission consists of performing MQ-1 Predator and MQ-9 Reaper remotely piloted aircraft operations at Creech, where it’s been doing so for the last 20 years.

“The 11th ATKS has played a role in every major war and in 1995, became the first RPA squadron in the Air Force,” said Lt. Col. Christel, 11th ATKS commander.

Although the Predator program was initially led by the Army, Pentagon officials chose the Air Force as the lead service. The 11th ATKS, then the 11th Reconnaissance Squadron, was activated at then Indian Springs Air Force Auxiliary Field, Nevada, when it assumed operational control of the medium altitude, long endurance RQ-1 Predator aircraft operations in Bosnia-Herzegovina in December 1995.

Today, the unit is responsible for conducting all MQ-1 and MQ-9 aircrew launch and recovery initial qualifications training, and operator upgrade training — instructing an average of 360 Airmen annually.

“We’ve only scratched the surface with RPAs,” said James Clark, Intelligence, Surveillance and Reconnaissance Innovation director in a 2015 interview. “From World War I RPAs to World War II to Desert Storm to Vietnam, we are at the beginning of a revolution. It’s exciting and the RPA units at Creech are the home of this revolution.”

The 11th ATKS was originally activated as the 11th Observation Squadron by the U.S. Army Air Forces at Wheeler-Sack Field, New York in 1942. 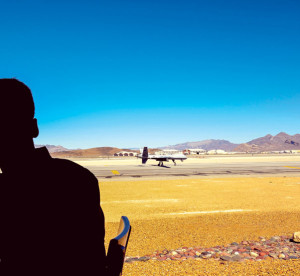 An Airman assigned to the 11th Attack Squadron watches an MQ-9 Reaper land on the runway March 3 at Creech Air Force Base, Nev. The 11th ATKS became the first remotely piloted aircraft squadron in the Air Force in 1995 and continues to conduct MQ-1 Predator and MQ-9 Reaper aircrew launch and recovery training today.

Since then it has seen many firsts, to include: the first successful employment of a Hellfire missile, the first lost aircraft during an RPA and manned aircraft engagement while enforcing the No-Fly Zone in Iraq, and the relinquishment of its direct combat support role to become the Air Force’s first Predator formal training unit.

“I am proud to be a part of the 11th ATKS and while we appreciate the history today it is important to look to the future of the squadron and our continued mission and people success so that the efforts of those before us during the last 75 years are honored,” Christel said.

No matter how many anniversaries the units at Creech have celebrated, one thing is clear, the mission to provide dominant persistent attack and reconnaissance capabilities for our nation and coalition partners will endure for years to come.