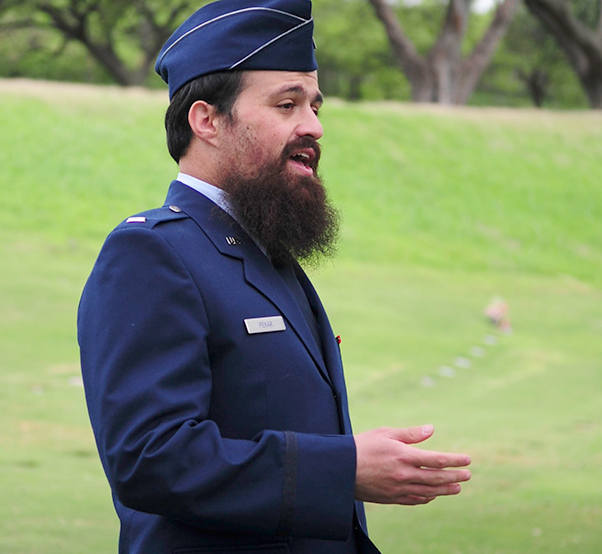 Seventy-years ago, a young man was killed in World War II just days before the surrender of Japan. Since then, he has been interred with the wrong emblem on his headstone — that is, until recently.

“While I was in New York, I found out about Sergeant Weiner’s story from his cousin,” said Pekar. “At first, it sounded like miscommunication, because we couldn’t find anything about him.  But after some digging, we were able to find the Quarter Master General’s form that confirmed Sergeant Weiner’s wishes to have the Star of David on his headstone.”

When he first heard about Sergeant Weiner’s story, Pekar said he felt a connection with the young man who died over seventy-years ago.
“Sergeant Weiner’s story resonated with me on so many different levels,” added Pekar. “With both of us being Jewish and Airmen, I felt like his story could have easily been mine. His story affected me on a spiritual level and as my duty as chaplain I knew we had to correct this mistake.”

In 1945, Weiner was a navigator assigned to the 345th Bombardment Group, which was stationed in Japan. During an air raid on Aug. 10, Sgt. Weiner died in action when his aircraft was shot down.

“What we’re doing here is known as the Hesed Shel Emes or the truest form of kindness,” added Pekar. “One of the best things you can do in your life is something for the dead because it is something that can never be repaid.” 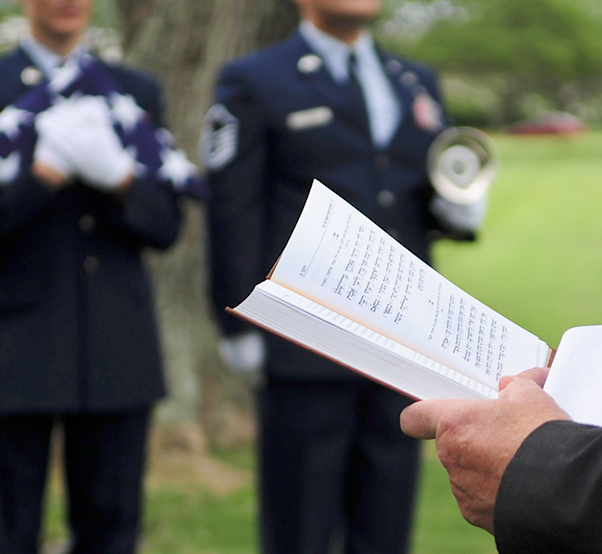 Daniel Bender, leader at the Lay Aloha Jewish Chapel, reads the Kelma’male Rachamim a prayer during a memorial service for Staff. Sgt. Jack Weiner, U.S. Army Air Forces, at the National Memorial Cemetery of the Pacific, Feb. 28, 2017. Weiner died in 1945 during an air raid in Japan and was originally interred with a tombstone featuring a Christian Cross instead of the requested Star of David.

Weiner made the ultimate sacrifice for his country, but his story would be incomplete without his family’s influence.

According to family records, his mother Eve was born and raised in the Jewish faith in Russia in the early 1900s.  During the time pogrom, an organized persecution of Jewish people in Russia, was rampant as growing tensions began spreading during World War I.  Fleeing persecution Eve migrated away from her homeland and she found refuge in the U.S.  Soon after settling in Brooklyn, N.Y., she gave birth to her only son Jack on July 22, 1922.

With the increase of anti-Semitism throughout Europe at the time, Eve was glad her and her son were safe from the persecution in Europe.  As Jack grew up and tensions turned into World War II, Eve celebrated the fact that she only had one son and he would be exempt from the draft. But Jack had other plans.

Despite being deferred from the draft for being an only child, Jack Weiner defied his mother’s wishes and joined the military.

Enlisting in the U.S. Army Air Force, Weiner was eventually stationed in Japan and assigned to the 345th Bombardment Group, 501st Bombardment Squadron. Just days after the atomic bombing of Hiroshima and Nagasaki, and mere weeks before Japanese government officially surrendered, Weiner’s plane was shot down.

Staff Sgt. Jack Weiner’s previous headstone and his corrected headstone. In 1949 Weiner was interred with the wrong religious symbol on his headstone. On Feb. 28, 2017, Chap. (1st Lt.) Levy Pekar, Rabbi chaplain assigned to Nellis Air Force Base, Nev., led the headstone replacement ceremony at the National Memorial Cemetery of the Pacific, Honolulu, Hawaii.

Originally buried at Yokohama Cemetery, located in Japan, Weiner’s remains were moved to Hawaii where he was laid to rest at the National Memorial Cemetery of the Pacific in Mar 1949. It was during this transition a mistake was made and Weiner ended up with a Christian Cross on his headstone, instead of the Star of David.

“We have a sacred duty to protect our service members and we will do so in all cases, in life in death,” said Pekar. “It is easier to protect them while they’re alive, but it becomes a bit harder after they have passed. I’m just glad we are able to set a precedence of correcting mistakes when we become aware of them, even 70-years later.”

Over thirty members of the community, both military and civilian, attended in Sgt. Weiner’s headstone replacement ceremony. Attendees also read Psalms, prayers, and since Sgt. Weiner’s family members were unable to attend the ceremony, over 30 members of the Jewish community came together to recite the Kaddish honoring and celebrating Weiner’s life and sacrifice.

“It speaks to this man’s incredible merit that so many years after his death, he and his religion are being recognized,” said Rabbi Itchel Krasnjansky, local Rabbi in Hawaii.  “He consecrated his life by making the ultimate sacrifice for his country. It’s appropriate that we are able to witness the occasion of him receiving his correct headstone and recognize his contribution to our nation.” 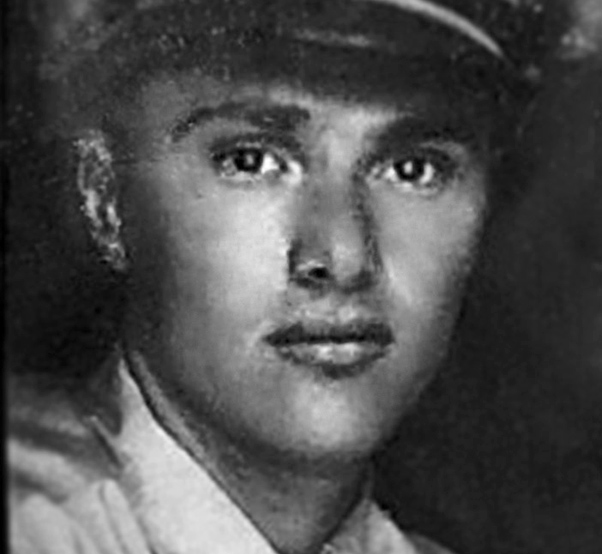