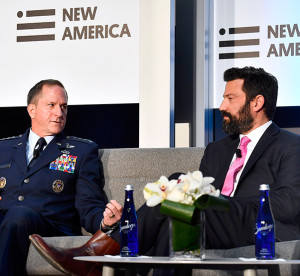 Air Force Chief of Staff Gen. David L. Goldfein discussed the Air Force’s role in a networked and multi-domain environment during the Future of War Conference 2017 in Washington, D.C., March 21.

Goldfein emphasized the role of fusion warfare in the future of the force.

“The key … is network,” he explained. “How do we network military capability so that we can … create this common operational picture for a decision maker, so we can achieve a decision speed that our adversaries can never match?”

A robust network will give the Air Force the ability to sense the globe through the six domains of air, land, sea, space, cyberspace and undersea, and merge that data into operational information for commanders.

As warfare evolves, air superiority will continue to be paramount to the success of the U.S. military. Goldfein defined air superiority as freedom from attack, to attack, and to maneuver. However, “Air superiority is not an American birthright,” he said.

“We take that very seriously. When a Soldier, Sailor, Airman or Marine is on the ground and they hear a jet noise, I don’t want them looking up – ever,” he said. “I want them to always know it’s me, so they can keep their eye on the enemy and do what they have to do.”

Air superiority begins with global reach and global power, Goldfein explained. Roughly every two minutes, aircraft are taking off somewhere on the planet, delivering personnel or supplies where needed.

Future requirements mean the Air Force has to grow, and needs talented people.

“We’re always thinking about our shortfalls, how we move forward to ensure we have the size force we need to be able to dominate those domains, especially in the global security environment … we’re all in competition for talent,” Goldfein said.

While Goldfein said the Air Force is mission ready today, he also noted future challenges include networking and building the capacity for simultaneous operations.

“Do I have the force that’s required to sustain the current fight, at its current operational tempo for the next 10 years, if that’s all I was doing? My answer is – absolutely, yes,” he said.

However, Goldfein also said the service must move beyond discussions of platforms and hardware and begin to focus on the networks they operate in. If the Air Force can do that, it will produce effects no enemy on the planet can counter.

“That, to me, is the center of mass for the future,” he said.