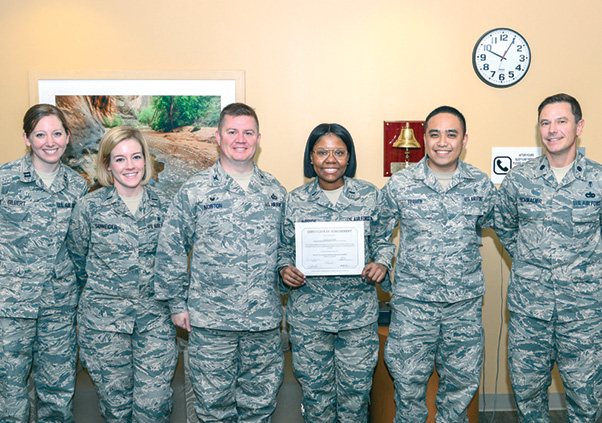 First Lt. Tyesha McBride, 99th Mission Support Group executive officer, is presented with a certificate of achievement for completing her cancer treatment on March 21 in the Mike O’Callaghan Medical Center at Nellis Air Force Base, Nev. McBride was diagnosed with Hodgkin’s lymphoma which is a cancer of the lymphatic system.

NELLIS AIR FORCE BASE, Nev. — ”You have cancer.” These are the three words no one ever wants to hear.

When 1st Lt. Tyesha McBride, 99th Mission Support Group executive officer, heard those words it was shocking. Cancer is a life-changing experience. Suddenly, your world is turned upside down, and the uncertainties of a cancer diagnosis seem overwhelming, but for McBride cancer was a challenge she knew she would overcome.

“Around July of last year, I felt a lump in my neck and I thought to myself ‘what the heck is this,’” said McBride. “I went to the doctor to get it checked out and they did an x-ray. I got a call saying that they thought they saw something in my chest and I needed to come in for a CT scan.”

The scan revealed a mass in McBride’s chest. The surgeon determined that she needed to come in immediately so that a biopsy could be done. When the results came back she was diagnosed with Hodgkin’s lymphoma.

According to the Mayo Clinic, Hodgkin’s lymphoma, formerly known as Hodgkin’s disease, is a cancer of the lymphatic system, which is part of your immune system.

“I was devastated,” said McBride. “I went home for the rest of the day and just slept. I couldn’t believe I had cancer because I felt okay and I had just taken a physical training test that scored a 95 on, so it was a shock.”

It wasn’t until her first round of chemotherapy that it really sunk in for McBride.

“After my first chemo session that was when it hit me, ‘Oh my goodness I really have cancer,’” said McBride. “Then my hair fell out which at first wasn’t great but, then it was kind of good because I didn’t have any hair to wash and I got to wear really cool hats and scarves.”

Although chemotherapy is rough, McBride always looks for the positive in things by seeing chemotherapy as just another step in overcoming cancer and being one step closer to being cured.

“I’m a carefree person so I just let things roll off of me. I immediately started a countdown of how many chemotherapy treatments I had left which helped me get through it and also my family and friends encouraging me helped a lot.”

Since August of 2016, McBride has been receiving chemotherapy treatment every two weeks with each session being five to six hours long. She shows up for her treatment at 8 a.m. and sits in a chair and receives her round of medications through a port hooked up in her chest.

“The sessions were draining,” said McBride. “I would just go home and sleep after. The side effects were awful. I would get extremely nauseous and there were days where I wouldn’t be able to make it to the office, but I had a laptop so I would work from home to keep the mission going.”

McBride has never wanted cancer to define her. She continues to work and live life as she did before the diagnosis. She’s an extremely driven person who enjoys her job and being around the people she works with.

As of today, she is well on her way to remission and has plans to keep driving the mission forward in any way.