Pilots and sensor operators assigned to squadrons across the 432nd Wing and the 432nd Air Expeditionary Wing provided the close air support and reconnaissance needed for coalition partners to drive ISIS fighters out of the city.

In January 2014, ISIS took control of Manbij, a northern Syrian city, and for more than two years used the city as a central coordination hub for logistics flow of foreign fighters to funnel in and out of Iraq and Syria, as well as, coordinating operations in Europe and elsewhere.

When thousands of U.S. backed fighters of the Syrian Democratic Forces launched an offensive in late May to take back the city, the MQ-1 and MQ-9 aircrews were there for support.

“From May to August 2016, over the two month campaign to free Manbij from the rule of ISIS, MQ-1Bs and MQ-9s flew nearly 500 sorties from our cockpits in the continental United States,” said Col. Case Cunningham, 432nd WG/432nd AEW commander. “Those sorties resulted in nearly 11,000 hours of persistent attack and reconnaissance in direct support of our partnered forces on the ground.”

The aircrews began supporting with battlefield preparation by focusing on reconnaissance to help support the battle plan. As the partnered forces encircled the city, the MQ-1 and MQ-9 aircrews reinforced with armed over watch and attack capabilities.

While supporting the partnered forces on the ground, aircrews experienced some challenges during the urban engagements in built-up areas.

“It was significantly difficult in the end because there were snipers and improvised explosive devices in the city center, making it hard for the SDF to advance,” said 1st Lt. Gregg, 432nd WG MQ-9 pilot. “We had to maintain very specific look angles down alleys while maintaining a close eye for civilians. That required very precise strikes and MQ-1 and MQ-9s were able to fulfill that role.”

Not only did the aircrews have to employ within close proximity to civilians, but ground forces as well.

“One of the things I saw in Manbij that was truly unique was the proximity we were finding a lot of the targets to friendly forces,” said Lt. Col. Ronnie, a 432 WG squadron commander. “They were sometimes within 100 meters and sometimes inside of 50 meters.” 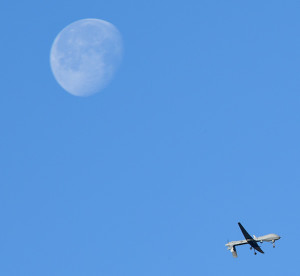 In 2016, 432nd Wing/432nd Air Expeditionary Wing MQ-1B Predator and MQ-9 Reaper aircrews assisted coalition partners in the reclamation of Manbij, Syria, from Islamic State of Iraq and Syria forces. Pilots and sensor operators assigned to squadrons across the 432nd Wing and the 432nd Air Expeditionary Wing provided the close air support and reconnaissance needed for coalition partners to drive ISIS fighters out of the city.

Ronnie expressed that employing weapons so close to friendlies, while nerve-racking, required the best his aircrews could deliver.
“During a danger close event, we have to be very cognizant of where the friendlies are in real time, if they’re moving or not, where the enemy is and how the trajectory of the weapon will impact,” Gregg said. “It takes more brain bytes to keep everything in order because you want to eliminate the enemy, but also don’t want to jeopardize the friendlies. It’s more stress than in other shots.”

Gregg also said working together as a crew is key to a successful employment. Understanding the joint terminal attack controller and the ground commander’s intent in real-time and being proactive as a cohesive unit keeps the ground forces safe while protecting civilians.

“The (coalition) had to trust that we were able to precisely put munitions where they needed without harming them or civilians,” Gregg said.

This represents the biggest challenge for sensor operators who are responsible for successfully guiding the weapons by laser to the target.

“We would be doing a normal scan and then go right into a troops in contact situation. Within three minutes we would engage the enemy,” said Staff Sgt. John, 432nd WG MQ-9 sensor operator. “The hardest part was staying mentally and physically focused because at any minute we would have to engage the enemy.”

Despite the large number of strikes, the MQ-1 and MQ-9 aircrews employed through precise engagement with the use of Hellfire missiles, designed for low collateral damage.

“The people we were fighting were not the residents of Manbij,” Ronnie said. “We didn’t want to completely uproot the populace and, ultimately, as a fighting force we wanted for them to have a home to go back to.”

By the middle of August of 2016, the MQ-1 and MQ-9 aircrews, with coalition partners successfully eradicated the ISIS presence in Manbij.

Aircrew knew they had a significant impact when they saw footage of the locals reclaiming their city.

“Initially you don’t realize the impact you’ve made, but upon reflection, you realize it’s a significant achievement to take the city back from ISIS,” Gregg said. “Being able to see civilians return home to live their normal life is an amazing feeling.”

“It’s an amazing experience to have such a role in this offensive and bring peace back to Manbij,” John said. “I know every day when I go to work I’m making a difference. Regardless of if I’m gathering intelligence or on the front line dropping munitions, I know that when I go home we did something to better the world.”

The aircrews also knew it wouldn’t have been possible without the intelligence and precision guided weapons provided.

“What we do is absolutely critical,” said Lt. Col. Erik, a 432 WG squadron commander. “The effects we have mean real effects for people on the ground, for not only our friendly troops but for innocent civilians trapped under ISIS rule. The work we do and can provide directly enables our friendly forces to come home, for them to push ISIS out and for people to get on with their lives.”

These engagements are made possible by a set of determined, precise and professional Airmen whose skill improves every day while keeping friendlies safe.

“Our aircraft is very capable because it has persistence, sensors that can see a lot of detail and provide coverage, as well as, weapons that can provide a low collateral damage strike, but ultimately it’s the people,” Erik said. “It’s our crew’s training, our professionalism and dedication to the mission that enables us to achieve these effects over the battlefield.”

According to Col. Cunningham, the Airmen flying MQ-1s and MQ-9s in these combat operations are just one more part of a joint and coalition team waging a dedicated, diligent and disciplined fight to free local populations from the rule of ISIS day in and day out while protecting civilians in a way that is unprecedented in the history of warfare.

“For the past 70 years, the Air Force has been breaking barriers as a member of the finest joint warfighting team on the planet and what the joint warfighting team accomplished in Manbij with our coalition partners in the air and partnered forces on the ground is evidence of the fact that the military defeat of ISIS is inevitable,” Cunningham said.