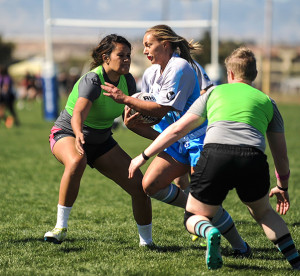 Leanne Hardin, a wing on the Air Force women’s rugby sevens team, runs with the ball during a Las Vegas Invitational match in Las Vegas, March 2, 2017. Hardin, a staff sergeant stationed at Pápa Air Base, Hungary, played multiple sports growing up and was encouraged by a coworker who played on the men’s team to give rugby a try.

She’s gassed. Leanne Hardin has played sports her whole life, so she’s had this feeling before, but she can’t remember being this tired 20 minutes in to a practice.

She’s on her feet carrying the ball, but between the lactic acid building up in her quads and the jet lag of traveling more than 6,000 miles in a few days, Hardin doesn’t realize how fast the opposing line is closing on her. Caught blindsided, she’s picked up and swiftly slammed to the turf.

It takes her a moment, but she wobbles back on to her feet, ignores the fresh gash on her knee and the stinging sensation in her shoulder, and follows the ball’s movement to the opposing wing. Now it’s Hardin’s turn to return the favor.

Before the ball carrier can build momentum and break away for a score, Hardin crashes in to her with the suddenness of a high-speed car accident, driving her six feet backward before planting her in to the ground.

Changing narratives
Early in its existence rugby was known as a “hooligan’s game played by gentlemen,” and still today the game is seen as a rough, violent game played by rough and violent men. Except that narrative has changed to socially accept female players.

On the first day of competition during the 2016 Summer Olympics in Rio, women’s rugby sevens matches were played in front of record crowds. The stereotype that women’s matches were going to be a snooze fest compared to men’s was proven incorrect with every tackle, line break and try. The women were fast, strong and just as — if not more so — fearless as their male counterparts.

Emily Raney, a fly half on the Air Force women’s rugby sevens team, pitches the ball during a Las Vegas Invitational match in Sam Boyd Stadium, Las Vegas, March 3, 2017. USA Rugby, the national governing body for the sport of rugby union, was so supportive of the Air Force women’s rugby sevens initiative that the team’s final game of pool play was moved to the 35,000-seat Sam Boyd Stadium and played in conjunction with the HSBC World Series’ Las Vegas stop.

Lisa Rosen, a former Air Force Academy and USA Rugby collegiate All-American coach, was hand-picked to serve as the team’s head coach and said she sees a lot of similarities between women breaking through the “divide” in rugby and women serving the military in combat positions.

“There used to be a combat exclusion right, so women couldn’t be in combat or in any combat role, but that’s changed,” she said. “That combat exclusion was always there for a reason. ‘Well you guys aren’t really going to fight.’ But, that’s gone now.

Picking up the bar
The Air Force women’s rugby sevens team made its debut at the Las Vegas Invitational, the largest rugby tournament in North America, and played against seasoned teams filled with Olympic and HSBC World Series veterans and hopefuls.

The team held its own against the top international competition, but was eliminated from the tournament in the Shield semifinals.

USA Rugby, the national governing body for the sport of rugby union, was so supportive of the Air Force women’s rugby sevens initiative that the team’s final game of pool play was moved to the 35,000-seat Sam Boyd Stadium and played in conjunction with the HSBC World Series’ Las Vegas stop. 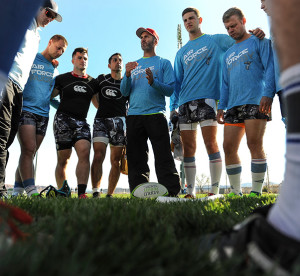 The Air Force men’s rugby sevens team huddles around a coach before a Las Vegas Invitational match in Las Vegas, March 2, 2017. The men’s team was joined at the tournament by the Air Force’s first official women’s sevens team.

“The way we’ve been talking about it internally is picking up the bar,” Rosen said. “We always talk about pushing the bar, but you can’t push it until you lift it.”

Seamless integration
Rugby sevens is a newer variant of the traditional 15-to-a-side rugby union game, and match time is reduced from 80 minutes to 14 minutes — hence the theme of ‘seven’ in rugby sevens: seven players on each side, two seven-minute halves.

Because of the shortened game time and smaller roster size, sevens games are more action-packed than 15s. And since the International Olympic Committee voted unanimously to add sevens into the game’s program, investment and development in the shorter game has been dramatic and this in turn has attracted individuals to the sport who may have never played rugby before.

“Sevens is a lot easier to teach than 15s, and it’s a lot easier to incorporate someone who has skills from other sports,” Rosen said. “So right now one of the best players from the U.S. and the captain of the U.S. (Olympic) team is a ‘crossover’ athlete who came to us from ice hockey, which has a lot of contact, passing, change of direction, etc.; so all of those skills that she developed translates to rugby. I encourage all the (Air Force) crossover athletes, if you think you can do it then come out and try.”

One crossover athlete on the Air Force team, Hardin, is a staff sergeant stationed at Pápa Air Base, Hungary, and said she never watched rugby before being approached by a coworker who thought she’d be a good fit for the team based on her physique and background in athletics. 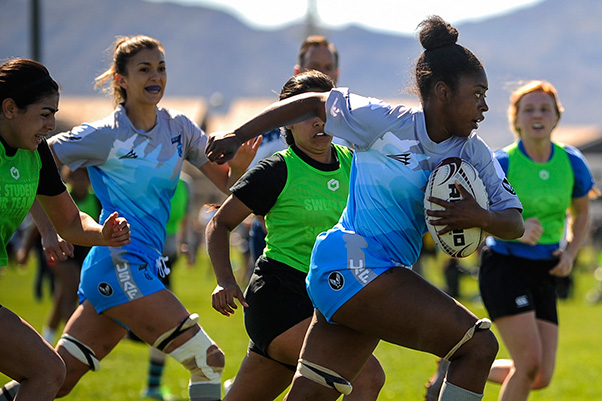 N’Keiah Butler, a wing on the Air Force women’s rugby sevens team, runs with the ball during a Las Vegas Invitational match in Las Vegas, March 2, 2017. Butler was one of 19 women from around the Air Force — active duty, Guard and Reserve — who came together to form the service’s first official women’s rugby team.

“To play for and represent the Air Force at a level that we are is amazing.”

For team captain Emily Raney, a first lieutenant stationed at Hill Air Force Base, Utah, the Air Force sevens team gives her a chance to reconnect to the game she played as a cadet at the Air Force Academy and experience something different from her day job as a ground-based strategic deterrent program manager.

Raney, who scored the team’s first ever try, credits the team’s success to the support from the men’s sevens team and to the overall Air Force lifestyle.

“I think one area that people in the military have an advantage, when it comes to rugby, is our adaptability,” she said. “We move all the time so we have to be adaptable in the military, and so coming in and understanding each other and focusing on the strengths of each individual, is something I think we kind of do seamlessly.”

Pushing the bar
It’s warmer today than the past few days, and Hardin already has sweat pooling on her forehead. Practices are over, now it’s time to put everything she’s learned to the test. 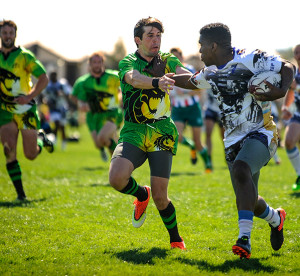 Malcolm Gilliam, a wing on the Air Force men’s rugby sevens team, stiff arms a defender during a Las Vegas Invitational match in Las Vegas, March 2, 2017. The tournament marked the first game action of the Air Force rugby program’s season, which will culminate in the Armed Forces Championship.

As she laces up her cleats for a match against the Scion Sirens, a team featuring the 2016 USA Olympic women’s rugby sevens team captain, Jillion Potter, Hardin hears a roar from an adjacent field. The Air Force men’s sevens team has just defeated a club out of the Denver area.

The referee’s whistle blares and the Sirens launch a sky-high kickoff. Hardin loses sight of the ball momentarily as it passes by the sun, catches it, and darts toward the sideline. She’s funneled back inside before getting drilled by Potter.

She immediately pops back up, unfazed, and gets back into the action. It’s only a few moments later that Hardin finds herself in the path of a bulldozing Potter. This time, it’s Hardin executing the take down, much to the delight of Coach Rosen.

“The bar is set,” Rosen said. “Now all we need to do is keep pushing.”

The Courage to continue