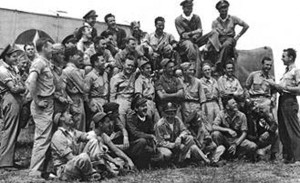 NELLIS AIR FORCE BASE, Nev.— April 18 marks an important day in the history of the 57th Wing and the U.S. Air Force.

In 1943, the 57th Fighter Group — now known as the 57th Operations Group at Nellis AFB — dealt a “fatal blow” to the German air force. The story of the unit’s achievement that day made headlines around the world, and became known as the “Palm Sunday Goose Shoot.”

The group’s pilots couldn’t believe it when they saw more than 100 JU-52s German transport planes resembling a large migration of geese flying slowly and very low over the Mediterranean. About 50 German Messerschmitt fighters escorted the transports that were filled with German troops. After deciding it wasn’t an enemy trick, mission commander Capt. James G. Curl said to his pilots, “Juicy, juicy, juicy. Let’s get ‘em, boys.”

The P-40s, splitting in pairs, quickly dove on the enemy with guns raging. They moved rapidly as they were low on fuel during the late afternoon mission.

The enemy transports blew up in mid-air; others crashed into the water or on the beach in frantic efforts to escape.

Pilots later said they did not fear the Messerschmitts as they knew those planes would have to ascend to get organized to fight; once they did that, the Spitfires would take them out.

As the British kept the German fighters occupied, the 57th FG had to dodge the falling enemy planes while continuing to press the attack on the transports … and all the while keeping an eye on their fuel gages.

Friendly fire also became a worry during the chaotic, tightly packed event. The earth’s surface literally became a scene from hell, with both the land and sea catching fire. German troops jumped from falling planes and scrambled from the wrecked remains of transports.

The 57th FG destroyed 75 enemy aircraft before it had to return home with extremely low fuel. Eight American planes were missing, but two had landed safely in friendly territory during the battle. The British had eliminated three Messerschmitts; the 57th enthusiastically gave thanks for their important role in allowing the Americans to concentrate on the transports.

Many interesting comments came from the pilots following the “massacre.” Lt. McArthur Powers said the attackers seemed almost to fight amongst themselves to get to the enemy, and he was afraid he was going to get left out.

Lt. R. J. Byrne commented, “I had a ringside seat for the whole show. All you could see were those big ships coming apart in the air, plunging into the sea and crashing in flames on the beach.”

Curl said the planes were so tightly packed he missed the transport he had targeted but hit the enemy plane flying just beyond it. He also saw one of his pilots take out two transports with one burst from his gun.

Praise came to the 57th FG in the field from many leaders, included a congratulatory note from Gen. George Marshall, Chief of Staff.

Reporters lauded the achievement that day, with The Stars and Stripes calling it “the greatest single aerial engagement since the Battle of Britain, if not in all history.”

Editor’s note: Information for this article was found in The Fabulous Fifty-Seventh Fighter Group of World War II, edited by Wayne S. Dodds.