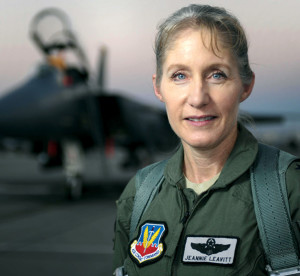 NELLIS AIR FORCE BASE, Nev. — With more than 3,000 flying hours she has broken more than the sound barrier, graduating from and becoming an instructor at the U.S. Air Force Weapons School and attaining operational experience in operations Southern Watch, Northern Watch, Iraqi Freedom and Enduring Freedom, according to U.S. Air Force records.

Her résumé speaks for itself.

It’s a résumé full of incredible accomplishments, not including breaking the barrier of being the first female fighter pilot.

For Brig. Gen. Jeannie Leavitt, 57th Wing commander, every accomplishment of her 25-year career flying the F-15E Strike Eagle stems from seizing her opportunities, by seeing them as challenges and overcoming them every step of the way.

“All of these were opportunities, even flying fighters when it was new for women, I didn’t think of them as breaking barriers,” said Leavitt. “Effectively, since I was the first female to do those things I did break them, but it was all based on opportunities that the Air Force gave me.”

When Leavitt graduated pilot training at the top of her class, she selected the F-15E Strike Eagle to be her primary aircraft. But because of a Department of Defense policy restricting women from flying fighters, she was denied by the Air Force Personnel Center.

“After that I really wanted to be a T-38 instructor pilot, but the Air Force wasn’t having anyone come straight from pilot training to be an instructor pilot,” said Leavitt. “So, I actually got an assignment for KC-10s at March Air Force Base [California] initially, but I never started the training because the policy change happened right after that.”

Once the policy was altered and women were allowed in the cockpit of fighter jets, Leavitt was hesitant to become the first female, but the opportunity and challenge of being an F-15E pilot was too much to turn away.

“Quite honestly, I didn’t want to be the first,” said Leavitt. “I actually asked if I could be the twelfth, thirteenth or fourteenth. I didn’t want the attention or the added pressure of being the first. When someone asked, I said, ‘If those are the terms of the deal, I’ll take it because I really want to fly fighters.’”

This want and drive to fly was one of the main reasons Leavitt joined the Air Force, but the reasons she has stayed are what are most significant to her.

“When I joined the Air Force, I wanted to fly,” said Leavitt. “I was an aerospace engineering major at the University of Texas, and I was learning to design airplanes. I thought it would be amazing to fly.

“I also wanted to serve my country, and the reason I stayed was the people I worked with and the mission. The sense of purpose, being a part of something bigger than yourself, being a part of a team, making a difference, defending the nation for my children is so important to me.”

Once DOD policy changed and women were allowed into combat fighter roles, Leavitt faced a new set of challenges, including when she participated in one of the Air Forces largest joint training exercises: Red Flag.

“When I was a brand new Strike Eagle wingman and I came out to Red Flag, I was very much a target,” said Leavitt. “Everyone knew who I was and knew that I was the first female fighter pilot, and quite honestly there were a lot of adversaries that wanted to take down my aircraft.

“My flight lead got a lot of kills during that Red Flag. Every time someone tried to roll in and kill me he would kill them. So, it was an entertaining deployment, and you have to take that challenge and turn it into an opportunity, and that’s what we did.”

Leavitt has excelled through training to the USAFWS to combat deployments and now as a leader of Airmen, learning to surpass challenges along the way.

This opportunity to connect with and lead Airmen, just like her leadership in the past did with her, is just one of the things Leavitt cherishes most.

“I have been fortunate enough to have incredible opportunities that the Air Force has given me,” said Leavitt. “I have had leaders who believed in me, and empowered me to do wonderful things and, in turn, had the opportunity to lead Airmen. I’m very thankful for that.”

From being empowered by her leadership to leading the 57th WG, the wisdom that she passes down to Airmen is from learned experiences and her own challenges she has faced.

“My advice to Airmen is to do the absolute best in whatever assignment they’re placed in,” said Leavitt. “I have all kinds of assignments and interesting jobs, some not being the most desirable. I would just say to excel in any opportunity you’re given. If you’re presented with a challenge, turn it into an opportunity and make the most of it.”