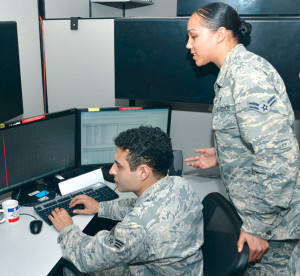 Analysts from the 453rd Electronic Warfare Squadron validate results from an automated flagging process called data-mining March 31 at Joint Base San Antonio-Lackland, Texas. Data-mining allows analysts to validate automated results rather than manually sifting through all the data.

JOINT BASE SAN ANTONIO-LACKLAND, Texas — Pay no attention to the man behind the curtain…or rather the men and women deep in a secured vault, jamming out critical electronic warfare missions.

A small team from the 453rd Electronic Warfare Squadron provides that exact capability and recently reinvigorated their efforts with a new data-mining initiative.

The 453rd EWS is responsible for “flagging” or threat change detection in different areas of responsibility. In turn, their analysis is used to reprogram certain Air Force weapons systems’ threat detection and engagement capabilities.

“We search for RADAR changes in areas of interest in order to flag them for electronic warfare reprogramming,” said Lt. Col. Clayton Small, 453rd EWS commander.

As part of the electronic warfare integrated reprogramming mission, the analysts used to manually search through the data, with one analyst and one radar signal—a tedious and lengthy process.

Data-mining is a new, innovative, automated process to help expedite their analysis.

“It takes our analysts a long time to weed through lots of data,” said Small. “Data-mining takes a lot of that burden away from the analysts.”

In essence, according to Small, the analysts are now validating what the machine spits out, rather than doing all the work themselves.
The efforts of the 453rd EWS are significantly impressive when compared to industry initiatives.

For example, IBM owns a system called “Watson” which is a “cognitive technology that can think like a human.”

According to Small, IBM’s Watson is an industry-built automation system the 453rd EWS could have purchased and put toward the problem.

“We have smart engineers and programmers that all got together and figured this out,” said Small. “The code was all written in-house along with in-house engineering support. Our own analysts compared the output with our legacy system to make sure we were comparing apples to apples.”

While this new program isn’t a fully cognitive machine like Watson, the in-house efforts by the 453rd EWS team saved the Air Force money and time. The new system saves approximately 760 man hours per week. It increase production 44 percent in the first four weeks of use.

“The smart folks in the squadron essentially tackled this and did it for free with innovation,” said Small. “This system will continue to improve and will eventually have more types of INTEL fed into it to make it even better.”

The step away from the manual process into automation provides great potential for the future EW mission. Small calls it a “paradigm shift” for the entire analysis cycle.

“This initiative will allow us to expand into more areas and produce more reports because the machine is always working, always looking for changes, and pushing valid changes to the analysts for reporting,” said Small.

Ultimately, the impacts reach far beyond the squadron level, according to Small.

“This will equate into a more holistic environmental picture for updates to the combat air forces, mobility air forces, and special operations forces’ electronic warfare assets.”