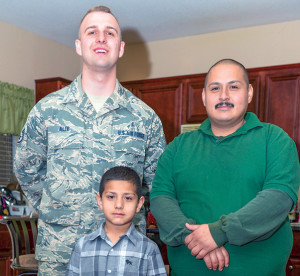 Staff Sgt. Jeffry Ally, 99th Medical Group surgical technician, right, Juan Sanjuan, Ally’s neighbor, and his son, Chava, pose for a photo in Las Vegas, Nev., April 4. Ally saved the child’s life when Sanjuan ran to him for help. His trauma and CPR experience allowed him to properly expel
food that was obstructing the child’s airways.

NELLIS AIR FORCE BASE, Nev. — No one can prepare to be woken up in their home at night with a child’s life in their hands.

For Staff Sgt. Jeffry Ally, 99th Medical Group surgical technician, this exact scenario happened to him, beginning with a bang on his door.

On March 28, he heard his neighbor banging on his front door, shouting for help.

Ally’s neighbors had been eating dinner when their son began to choke.

The child’s father, Juan Sanjuan, thought to call an ambulance, but he knew the hospital was too far away to help his son. He instantly recalled a conversation he had with Ally about the Airman’s medical background when they first met.

“We called the ambulance while he was gasping for air, but you could tell he wasn’t breathing properly,” said Sanjuan. “I don’t know CPR. The first thing that popped into my mind was: ‘Find Ally.’”

Sanjuan took his son in his arms and rushed next door to Ally’s house. Ally heard the commotion and the pounding on his door and ran downstairs to see his neighbor holding his son, asking for help.

“I wasn’t afraid, but I thought, ‘this father is handing me his son and trusting me to save his life,’” said Ally.

Ally immediately sprang into action when he realized the child wasn’t breathing. Not knowing he was choking on a piece of meat, he began CPR protocol and laid the boy down on his side.

From trauma and CPR experience, Ally stated that the airway was the priority. Knowing this was vital, he hit the center part of the child’s back hard to expel any foreign objects.

This worked. It expelled a piece of chicken that had been lodged in the child’s throat and he immediately lurched forward gasping for air.
Ally’s quick response saved the child’s life.

“I didn’t know if I would be able to respond to those moments,” said Ally. “I work around trauma every day, but being woken up by your neighbor saying, ‘please save my son’s life’ is different. It makes me happy that I was able to help and everything worked out.”