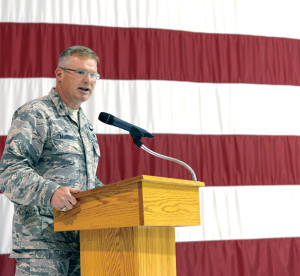 Col. Paul Murray, 99th Air Base Wing commander, explains the essence of the honorary commander program during an induction ceremony for 25 new members April 6 in the Thunderbirds Hangar on Nellis Air Force Base, Nev. The honorary commanders inducted represent key roles in the surrounding communities and will serve as a bridge for the Air Force to work with and foster deeper relationships to increase public awareness of the missions, policies and programs of the U.S. Air Force.

NELLIS AIR FORCE BASE, Nev. — With more than 130 guests in attendance, the 99th Air Base Wing hosted the annual Honorary Commanders’ Induction Ceremony for 25 new members April 6 in the Thunderbirds Hangar.

The mission of the Honorary Commanders Program is to educate key community leaders about a unit’s mission and to foster a supportive relationship with the community, increase military involvement in civic endeavors and organizations and make members of the local community feel part of the unit.

During the ceremony, 99th Air Base Wing commander, Col. Paul Murray, took to the stage to further explain the essence of the honorary commander program.

The relationships that are fostered by the program allows for essential outreach with the communities in the surrounding areas.

“Public trust and community support are keys to a strong military structure,” said Murray. “Our goal is to acquaint local community leaders with the many missions here at Nellis, Creech and our nation’s Air Force. This honorary commander program is vital to our overall community outreach effort.”

For some, the ceremony was an emotional one.

“Being in that hanger brought back memories of so many of my fellow Airmen that served with me, most returned home, some did not,” said Hugh K. Sinnock, 99th ABW honorary commander. “I am committed to representing them with honor.”

Sinnock went on to explain what being inducted into the program means to him personally.

“I am thrilled,” said Sinnock. “It is a great honor, especially for someone like me, who was in the Air Force from 1967 to 1972. I have not felt this proud since the day I pinned on my wings!”

The honorary commanders that were inducted represent key roles in the surrounding communities and will serve as a bridge for the Air Force to work with and foster deeper relationships to increase public awareness of the missions, policies and programs of the U.S. Air Force and to gain a better understanding of the Department of Defense.

“Each of you were carefully selected for this program due to your outstanding performance in either your professional or personal lives,” said Murray. “Whether it is through your involvement in the community or through your commitment to improvement, each of you has strived to make Nevada a better place to live, work and play.”

As the ceremony came to a close, Murray took the time to thank not only the new commanders but the current ones that have been serving Nellis AFB, Creech AFB and the Nevada Test & Training Range.

“Congratulations to our new honorary commanders, and thank you, again, to our current honorary commanders for joining us,” said Murray. “We are indeed privileged you have accepted the invitation into our program. You are part of our team now, and we hope this relationship continues for many years to come.”