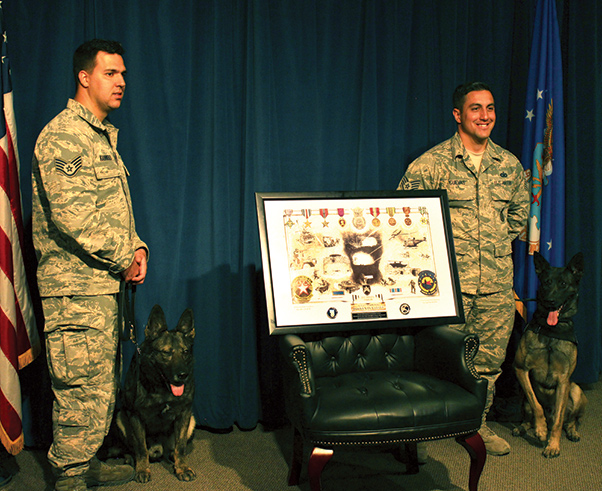 NELLIS AIR FORCE BASE, Nev. — The Silver State Peacekeepers showed their support to the Nellis Air Force Base community by donating a portrait displaying the history of the security forces career field to the Nellis Airman Leadership School, Feb. 24.

The Silver State Peacekeepers is a chapter of the Air Force Security Forces Association, located in Las Vegas that preserves and enhances the image and honor in the Security Forces career field by building community relations with military personnel and veterans.

There is an ethos that binds those in security forces, active and retired, known as the bond of the blue beret. It is the underlining belief that there is a bond and a sense of camaraderie amongst all who have served and given their lives as Defenders for their country.

I believe the bond is very true and the SSP displayed this not just for myself as being a Defender as my primary Air Force Specialty Code, but to all the security forces members at Nellis AFB and also the Airman Leadership School.

This is very special to us at the schoolhouse because they decided to extend that same tenacity to all other military personnel the day of the event and continuously do. I truly believe the actions they took show we, as everyone serving in the Armed Forces, have an inner bond with all who have served.

The event took place at the Nellis ALS auditorium with leadership from the 99th Security Forces Squadron, the 99th Force Support Squadron, and the SSP. During this event, words were spoken from the different representatives and a portrait commemorating the battles of the Tet Offensive was presented.

When I spoke to ret. Chief Master Sgt. Cal Stickley, the chapter’s chairman, he expressed how grateful he, along with his chapter, were for us for taking the time to network with them. He was also optimistic of opening relationships with the 99 SFS, who offered an invitation to this year’s police week.

This brought me great joy because I personally felt the sense of wingmanship being embodied through all who was in attendance. I was able to see what I was taught to do since day one of my military career, to never leave a wingman behind.

I believe too often we forget where our heritage comes from and how to properly preserve that. We have a staggering amount of veterans in our community who want to support us for what we do [currently] and what they did [in prior generations] to make sure that we all are here today.

It brings me great honor to be able to work with them and to strengthen our esprit de corps with truly remarkable heroes.

It was inspirational to me to think this is something we can constantly commit to everyday, not just a one event deal. We should not only encourage commitment to those who served prior, but also your wingman, regardless of service, every moment we get. This also includes our civilian core who support our mission and who are mostly comprised of veterans themselves.

I think this event can be a reminder that we have a road to walk down and we are leaving history in the wet pavements of time.

I truly treasured my time as a Defender and I am able to display that as an instructor at ALS. This is something I want all who serve to be able to do; to say they were a part of something much bigger than themselves and to bolster that thought into the world during their time on earth.

Throughout history, the Air Force has shown we are the number one air power in the world, not just because of our warfighting capabilities, but also our exemplary camaradie that we hold dear forever. We are all Airmen, and by the creed we uphold, we are faithful to a proud heritage, a tradition of honor, and a legacy of valor. Together, we will never falter, and most certainly, we will not fail.