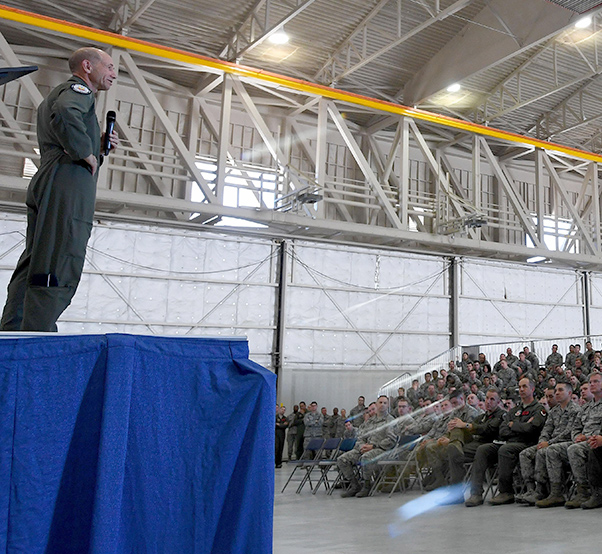 Gen. Mike Holmes, commander of Air Combat Command, speaks to the Airmen of the 432nd Wing/432nd Air Expeditionary Wing on his first visit to Creech Air Force Base, Nev., May 1, 2017. Holmes reiterated the impact of the remotely piloted aircraft enterprise in the Air Force and encouraged Airmen to continue to serve.

Gen. Mike Holmes, commander of Air Combat Command, visited the men and women of the 432nd Wing for the first time May 1-2, 2017, at Creech Air Force Base, Nev.

During his visit, Holmes received a first-hand look at MQ-1 Predator and MQ-9 Reaper, remotely piloted aircraft operations and the mission of 432nd WG/432nd Air Expeditionary Wing. He also spoke to the Airmen who support the mission 24 hours a day, seven days a week, 365 days a year.

The general held an all call to address Airmen’s questions and discuss current operational missions, challenges and his lines of efforts.

“We have three priorities in Air Combat Command, to regain our unit readiness, have ready Airmen and ready families, and have ready weapons systems,” said Holmes.

Goals associated with the priorities include stabilizing the remotely piloted aircraft force as the Air Force implements basing, manning, and scheduling recommendations from the Culture and Process Improvement Program.

He thanked Airmen for their dedication and sacrifice in providing dominant persistent attack capabilities to combatant commanders, while recognizing the global MQ-1 and MQ-9 contributions as a Total Force effort with Air Force Reserve and Air National Guard. 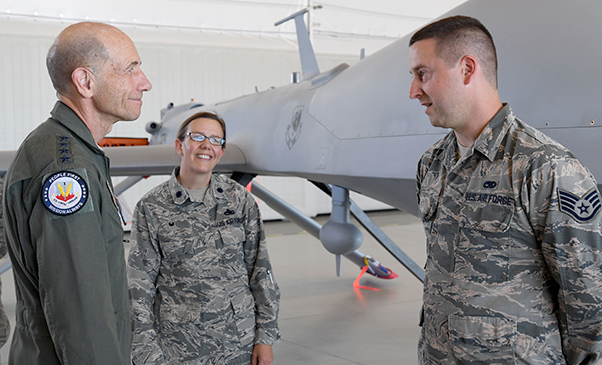 Gen. Mike Holmes, commander of Air Combat Command, speaks to Staff Sgt. Joseph, 432nd Aircraft Maintenance Squadron during his first visit to Creech Air Force Base, Nev., May 1, 2017. Holmes discussed his dedication to providing Airmen and their families with the tools necessary to continue to serve in today’s Air Force.

The Air Force and its senior leaders continue to develop these weapon systems and the professionals who fly them to support operations in contested and permissive environments.

Additionally, Holmes recognized several top performers around Creech AFB with a coin to acknowledge their contributions to the mission and the capabilities they provide to the joint force commanders.

“This was the proudest moment in my career, so far, and actually shaking his hand, being recognized in person at that level was exciting,” said Staff Sgt. Joseph, 432d Aircraft Maintenance Squadron MQ-1/MQ-9 crew chief, who was recognized for superior performance.

Holmes went on to speak about the daily impacts Airmen make in real time while supporting combat operations downrange. He reiterated the importance of the RPA enterprise on the Air Force’s mission and encouraged Airmen to continue to serve.

“You are the most demanded and requested resource in the United States Air Force by combatant commanders,” Holmes said. “You bring a unique capability that no one else does. You can be over the battlefield when no one else can. You can get to places that we have no other way to get to, and we are going to continue to rely on you. I am proud to be in Air Combat Command alongside you all.” 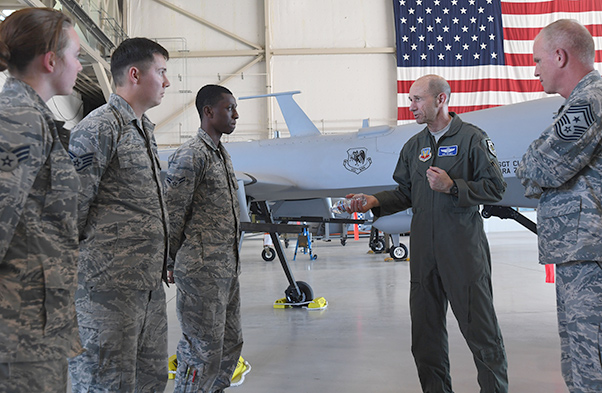 Airmen assigned to the 432nd Maintenance Group speak with Gen. Mike Holmes, commander of Air Combat Command, and ACC Command Chief Master Sgt. Frank Batten, during their first official visit to Creech Air Force Base, Nev., May 1, 2017. The 432nd Maintenance Group is responsible for maintaining both the MQ-1 Predator and the MQ-9 Reaper in support of combat operations anywhere in the world 24 hours a day, seven days a week, 365 days.