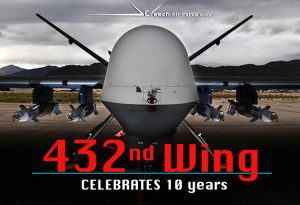 The 432nd Wing celebrated their 10th anniversary at Creech Air Force Base, Nev., as a combat remotely piloted aircraft wing flying the MQ-1 Predator and MQ-9 Reaper May 1, 2017.

The 432nd Wing celebrated their 10th anniversary at Creech Air Force Base, Nev., as a combat remotely piloted aircraft wing May 1, 2017.

For the past 10 years, the men and women of the 432nd WG have flown the MQ-1 Predator and MQ-9 Reaper in combat operations across the globe from cockpits located at Creech AFB, 24 hours a day, seven days a week, 365 days a year.

Before May 1, 2007, the Airmen flying and supporting MQ-1 and MQ-9 operations belonged to the 57th WG at Nellis AFB, Nev.

“As the focus and the mission grew, it became apparent that leaving it as a subset of another organization was no longer feasible,” Cunningham said. “We needed to have an organization that was dedicated to this mission set and that way of accomplishing airpower.”

“Let there be no doubt – the 432nd WG will be on the leading edge of our warfighting forces, whenever and wherever, we answer our nation’s call,” said former Chief of Staff of the Air Force, Gen. Michael Moseley in a letter to the 432nd WG in 2007. “I expect the 432nd WG to continue to deliver lethal and non-lethal effects worldwide as a key component of the global vigilance, reach and power…only America’s Air Force can provide.”

As the secretary of defense and joint forces commanders demanded more and more combat RPA capabilities, the wing experienced surging growth to continue providing critical airpower capabilities. In 2007, the wing flew just 12 combat lines a day and was scheduled to fly 21 by 2010. By 2012 the wing flew more than 50 lines a day. In 2014, the wing participated in 65 lines worldwide before settling to 60 combat lines in 2015.

“When you consider we were in Afghanistan and Iraq in 2007 heavily engaged on two battlefields, I think having an organization to support the Airmen on the ground was critical,” Cunningham said. “Since then we’ve supported missions such as Operation Odyssey Lightning, Operation Freedom Sentinel and we continue to fly in Operation Inherent Resolve and others.”

While supporting these engagements the wing has also hit milestones such as accomplishing one million flight hours in 2011, then quickly doubling to two million in 2013. Not only do the flight hours continue to keep rising, the number of weapons employments, do as well. Cunningham attributes this to the persistence, precision and professionalism of the wing’s Airmen.

The wing is home to 11 flying squadrons, two operational groups and a maintenance group while also partnering with active duty, guard and reserve units in 15 different locations.

“Throughout the period of the wing’s existence what the Airmen of the 432nd WG have done for our nation’s security over the past 10 years is nothing short of eye-watering,” Cunningham said. “There are people who sleep safely at night in the U.S. and across the globe because of the Airmen of this wing and I’m incredibly proud to be a part of it.”