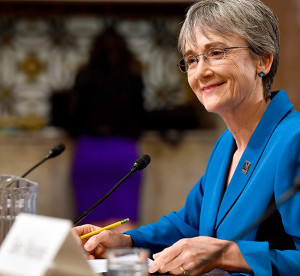 Heather Wilson was confirmed as the new Secretary of the Air Force by the Senate May 8, 2017.

Heather Wilson will be the next secretary of the Air Force, following her confirmation by the Senate May 8, 2017.

Wilson, who is stepping down from her position as the president of the South Dakota School of Mines & Technology to take the post, is expected to be sworn in within a week.

“We live in a remarkable country, protected by innovators and intrepid Airmen who take great risks on our behalf,” said Wilson. “I look forward to getting to work, focusing on readiness, modernization, development of leaders and research for the future.”

Wilson graduated from the U.S. Air Force Academy in the third class to include women. After graduating from USAFA in 1982, she earned masters and doctoral degrees as a Rhodes Scholar at Oxford University in England. She served as an Air Force officer in Europe during the Cold War and on the National Security Council Staff under President George H.W. Bush during the fall of the Berlin Wall, and the collapse of the Warsaw Pact. She has also worked as an advisor to several large defense and scientific organizations both before and after serving for a decade in the U.S. Congress.

The daughter and granddaughter of aviators, Wilson is an instrument rated private pilot.

Wilson becomes the second confirmed appointee in the Defense Department and will be responsible for organizing, training and equipping the U.S. Air Force of 660,000 Active-duty, Guard, Reserve and civilian Airmen, as well as managing its $132 billion budget.

Wilson replaces Lisa Disbrow, who has been Acting Secretary of the Air Force since Jan. 20, 2017.