NELLIS AIR FORCE BASE, Nev. — Throughout the storied past of Army Air Corps and the U.S. Air Force, many aircraft have laid the foundation for today’s fleet of air power.

The F-86 Sabre, or SabreJet, is one of the cornerstones upon which the modern Air Force was built since its inaugural flight on Oct. 1, 1947.

The F-86 Sabre Association met on April 24 on the flightline here to pay homage to this retired jet and the Airmen who flew it for the last time.

“The first forming of the association took place in 1981, when three of our pilots got together and realized we needed to have a reunion and an organization,” said retired Lt. Col. J.R. Alley, F-86 Sabre Association president. “It started to grow and grow into the mid-90s and it became more organized. We grew in personnel from that small amount in the mid-90s to almost 2,000 worldwide.”

The F-86 Sabre was originally designed as a high-altitude fighter, making it highly valued during the Korean War. Subsequently, it was redesigned as an all-weather interceptor and fighter bomber.

“In that era, (the Air Force) had 300 F-86s at that time,” said Alley. “It was a different mindset of flying, very aggressive, and you had to do everything better, tighter and faster than the other guy.”

The first Sabre arrived at Nellis for testing and training in 1949 and was assigned to the 3525th Aircraft Gunnery Squadron. By late 1950, an average of 27 F-86s were on base.

In early January 1952, after being sent back to the factory for modifications, the F-86 was fully implemented into the Combat Crew Training School. The Nellis training mission grew and implemented pilots from the Royal Air Force, becoming the pride of Air Training Command until the aircraft was removed from Nellis in June 1966.

Soon after the end of the F-86 at Nellis, production halted on the jet in December 1966. 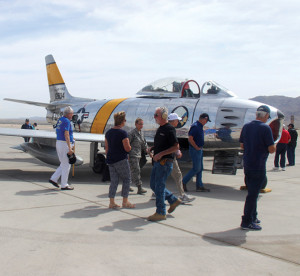 Members of the F-86 Sabre Association view an F-86 Sabre during the group’s last reunion on the flightline at Nellis Air Force Base, Nev., April 24. The F-86 Sabre was originally designed as a high-altitude fighter, making it highly valued during the Korean War.

The organization’s members travelled to Nellis to have one last reunion before disbanding after 35 years.

“The average age of the group is now around 86 to 87 (years old), the World War II guys who flew in Korea are up in their 90s, and the ones who actually flew in the Korean War are in their late 80s,” said Alley. “So this will be our last reunion, and we are going to stand down. It’s been tremendous to come out and have Nellis put this on for us.”

While the F-86s operational days came to an end, the jet has found its home with the Air Force Heritage Flight, performing at air shows around the country.

“We always like to look back at our heritage,” said Alley. “What we were and how we have come along the way. If you forget that then you start losing things.”